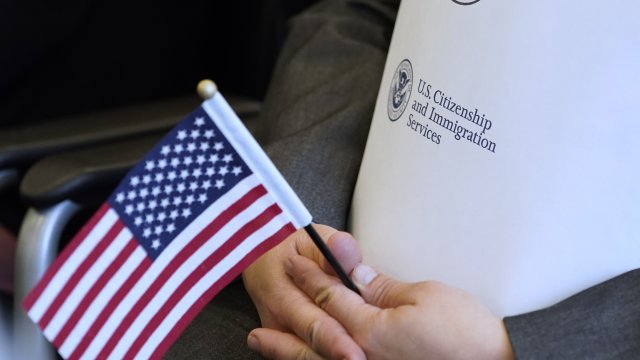 "Through the public charge rule, President Trump's administration is reinforcing the ideals of self-sufficiency and personal responsibility."

The Trump administration's new green card policy aims to ensure that legal immigrants don't become a "public charge," or a burden on taxpayers.

But will the new policy save taxpayers money? Or will it actually hurt the economy?

"... Seeking to ensure that our immigration system is bringing people who can stand on their own two feet, who will not be reliant on the welfare system."

The new rule denies green cards and visa extensions for applicants who are using, or are deemed likely to use in the future, food stamps, housing assistance, Medicaid and several other benefits. The administration estimates that nearly 400,000 people will drop out of these programs as a result of the rule. And that will save the government around $1.5 billion a year, according to DHS. But economists and immigration experts told Newsy that the policy doesn't make a lot of sense as a savings tool.

"If I was sitting in that federal government and I wanted to save money, this would not be the first place I would look for any money."

Pia Orrenius of the Federal Reserve Bank of Dallas says states and cities with large immigrant populations will simply pick up the tab.

"When you're spending less on health care at the federal level, then that's going to have to be made up for at the state and local level."

That's one of the reasons that 20 states have recently sued the administration. They argue that beyond taking on the medical costs for people who cancel Medicaid, they'll also experience a "prevalence of disease" and "increased poverty."

"The system begins to fall apart in a hurry when folks are afraid to access benefits they are entitled to."

Washington Attorney General Bob Ferguson leads one of the lawsuits against the new rule. That lawsuit says the rule's "chilling effect" will lead to "families forfeiting health insurance, medical care and nutrition assistance not only for themselves but also for their entire households."

The states also say the rule could be a job-killer. A 2018 UCLA report says the reduced flow of federal benefits in California could cost the state almost 18,000 jobs — nearly half of them in health care.

"With fewer people using services, jobs will then be lost. And as a people start to fall out of that system, you know, the whole infrastructure kind of will shrink."

But even though DHS says the rule "may benefit the U.S. economy," it also says that the point of the rule is not to save money. Rather, it says, the rule is meant to "minimize the incentive" for people to immigrate "due to the availability of public benefit." Still, the rule, by design, favors educated and high-skilled immigrants over low-skilled ones — a goal long championed by some conservatives.

"Really, our system is just not very responsive to the changing needs of our economy and also the changing realities of a stratified society in which people with very low incomes are oftentimes struggling, whereas people with higher incomes tend to be in a better position to support themselves and their families."

The U.S. currently grants about 1.1 million green cards — or permanent resident visas — every year. About 62% go to immigrants with relatives in the U.S., and only 14% go to immigrants with job offers. The new rule could reverse that trend. And conservatives say that will be beneficial in the long-term, including for the states.

The Federation for American Immigration Reform, which lobbies for immigration restrictions, also argues that automation is gradually eliminating the types of jobs that poorer immigrants typically rely on.

"If you look at what is happening in the economy, these sorts of jobs are being phased out. They're being automated."

That being said, Orrenius says U.S. employers in industries that rely heavily on that workforce — such as agriculture, landscaping and construction — are experiencing record job shortages.

"And that really hamstrings the economy. It's a bottleneck to growth, it prevents firms from hiring and expanding, and it prevents investment. We have these labor shortages, well, then we have to address that demand in some way or another, hopefully a legal way."