Will The Next Big Climate Deal Be Legally Binding? 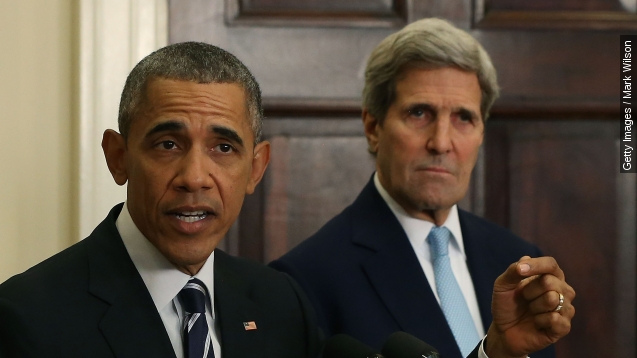 Secretary of State John Kerry is causing some confusion over upcoming climate talks in Paris. (Video via U.S. Department of State)

In other words, the U.S. wouldn't face consequences, like sanctions, for violating an agreement. (Video via The White House)

That's at odds with the European Union, which says the Paris agreement has to be legally binding. But Kerry's stance makes sense from the administration's point of view. (Video via European Parliament, U.S. Department of State)

The more legally binding any deal is, the better the case Congress can make that it should have a say. And with Republicans controlling both houses, that's something the administration likely wants to avoid. (Video via C-SPAN)

It's important to note this isn't a new strategy.

In the wake of the unproductive Copenhagen talks in 2009, The New York Times reported policy leaders were already moving away from fights over legal language to focus on broader goals instead. (Video via EurActiv)

But it's more relevant now because both the Iran nuclear deal and the ongoing Trans-Pacific Partnership trade deal have left some in Congress wary of the White House handling international agreements on its own.

"They claim the science of global warming is settled, but I suggest questions remain," Sen. Jeff Sessions said on the Senate floor.

And that's without mentioning the partisan divide. Republicans, who control Congress, generally oppose action to cut carbon emissions, and the same goes for almost all of the GOP candidates. (Video via CNBC)

On the other hand, that kind of opposition makes a legally binding agreement all the more appealing to leaders outside the U.S. who want to make sure the next president can't just walk away from a deal.