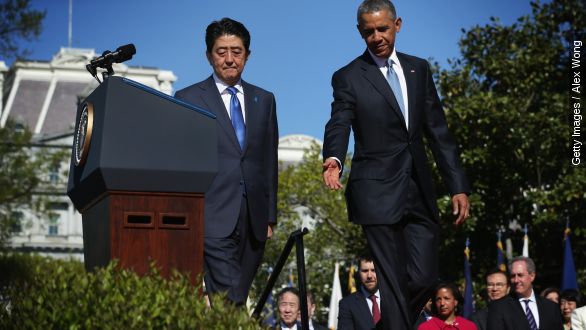 "Dec. 8, 1941. As the nation rose in fury and shock against the Japanese attack on Pearl Harbor, Roosevelt asked Congress to declare war on Japan." (Video via U.S. National Archives)

On Wednesday, Japan's prime minister, Shinzo Abe, will address Congress from that same podium. (Video via Government of Japan)

Officially, Abe's coming to Washington to talk trade and security, but there's no overlooking his visit comes just months before the 70th anniversary of the end of World War II.

The big question is whether Abe will make Japan's actions during the war a part of his speech, and most importantly, whether he'll apologize for them. (Video via U.S. National Archives)

A deep conservative, Abe's suggested before Japan has said sorry enough, and has gone as far as to question whether Japan committed “aggression” against anyone.  (Video via Government of Japan)

Like Germany, Japan has apologized profusely for its actions. But unlike Germany — whose chancellor once fell to his knees in a show of repentance — many of Japan's apologies have fallen flat. (Video Geschichte lebt durch Geschichten)

If there's an apology given at all. While speaking at a summit attended by his Chinese counterpart this month, Abe expressed his remorse for Japan's militaristic past but stopped short of apologizing for it. (Video via CCTV)

Keep in mind, his audience Wednesday will be as much South Korea and China as it is Congress.

That much is clear from the headlines coming out of both countries, where the wounds of World War II have been slow to heal.

"Pressure continues to build on Abe to apologize for its wartime atrocities," an anchor for Arirang said.

Critics are demanding Abe stick to the script written by his predecessors, in particular that of then-Prime Minister Tomiichi Murayama, who offered his "heartfelt apology" in 1995. (Video via C-SPAN)

"These wounds need to be closed. They need to be healed and Prime Minister Abe can do that closure, can do that healing by exposing those wounds to the light of the truth and an apology," Rep. Steve Israel, D-N.Y., said on the House floor.

New York Rep. Steve Israel and about two dozen other U.S. lawmakers have signed a letter, urging the prime minister to “lay the foundation for healing and humble reconciliation” by addressing Japan's wartime legacy.

Part of that legacy — sex slaves. Historians estimate as many as 200,000 women from Korea and China were forced to work in Japanese-run military brothels during the war. Many in Abe's own party say the women were willing prostitutes.

This video includes an image from Imperial War Museum / E A Lemon.