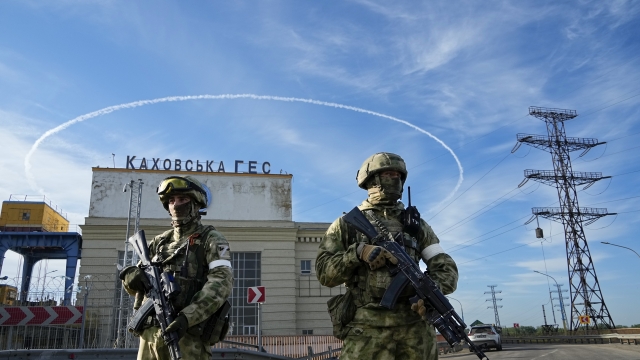 The most pivotal question at this eight-month mark of the war, is whether Russia plans to withdraw from Kherson.

As Ukraine begins its ninth month of fighting, the south becomes the main focus of Kyiv's forces. The loss of Kherson would be a major embarrassment to Putin, who last month declared it one of four Ukrainian regions annexed to Russia.

It would also shatter Russian hopes of taking Mykolaiv and Odesa, to cut off Ukraine's access to the Black Sea. But, last week, Russia's newly appointed commander in Ukraine Gen. Sergei Surovikin, said the region was proving "quite difficult" for Russia.

Difficult indeed. Kherson is Russia's only foothold on the west side of the Dnipro River and for Russia, sending fresh troops and supplies to the city has become increasingly perilous — with Ukrainian forces, since August, using the U.S. supplied HIMARS rocket system to attack the main bridge to Kherson.

The city is the capital of a region of the same name, one of four Russian President Vladimir Putin illegally annexed last month.

Russia continues to use makeshift pontoon bridges to get across, but those come under attack as Ukraine's army steadily advances south, retaking villages on the outskirts of the city. But the head of Ukrainian intelligence told a national news outlet Monday that Russia is "creating the illusion they're leaving Kherson, but in fact, they are moving military units there."

"We have information that Russian terrorists mined the dam and units of the Kakhovka hydroelectric plant," said Zelenskyy. Detonating them would result in nearly five billion gallons of water inundating the region and then, he said, Russia would blame Ukraine.

Fight, flee or flood? Kherson's fate could be soon decided, as western military analysts predict Ukraine will try to retake the city before winter, just weeks away.