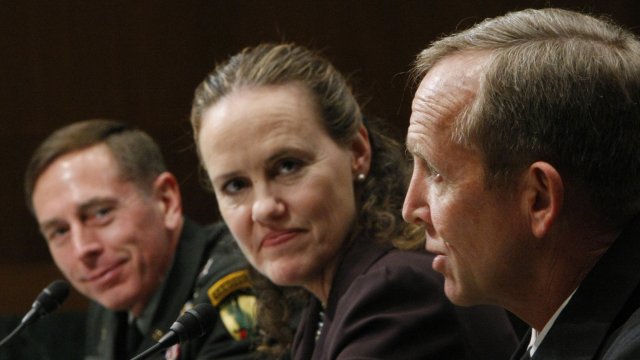 President-elect Joe Biden could make history by choosing a woman to lead the Pentagon.

President-elect Joe Biden could make history by choosing a woman to lead the Pentagon. This would be in line with his pledge to define his administration with a diverse Cabinet.

“Having a woman as secretary of defense would be important because it would show that a woman could do it and could do it successfully,” Women in Defense Executive Director Rachel McCaffrey said.

Michèle Flournoy was a contender for the top job at the Pentagon when Hillary Clinton ran for president in 2016, and her name is coming up again as Biden plans his Cabinet.

“She's very well respected and well known Pentagon. It's not the first time that she's had her name floated as somebody to be in a leadership position,” Robin Minor told Newsy.

The 59-year-old is co-founder and managing partner of Westexec Advisors,  a Washington consulting firm that helps companies navigate government bureaucracy.

Flournoy has years of experience working with the Defense Department.

During President Obama’s terms in office, Flournoy co-led the transition team at the Defense Department and also served as the undersecretary of defense for policy from 2009-2012.

“The military has been a male-dominated, male leadership, forever. And when you change that dynamic and put a woman in place, it kind of shatters barriers, but also gives other people something to aspire to. It kind of changes the narrative of: women can't be, a woman can't do, a women shouldn't or she's done it,” Minor said.

Across the military community, many have taken to social media to express their thoughts on nominating a woman for secretary of defense. Comments vary from “about time” to “as long as she’s qualified.”

Out of the 28 men who have held the position since 1947, a majority were veterans, raising concerns among some in the military community that she may not have the experience needed to hold the position.

Janelle Mendez, CEO of the Military Sexual Trauma Movement, says having a woman in that position is instrumental for combating an issue the military has not been able to get a handle on: sexual assaults among its ranks.

Others see her as a potential role model for younger generations.

Biden has not confirmed whether Flournoy is his top pick, and she has made no public comments. Coworkers and former colleagues describe her as a highly credentialed strategist who has dedicated her career to advancing the nation’s national security mission. Others are concerned about the influence consulting companies like hers may have on a Biden administration.