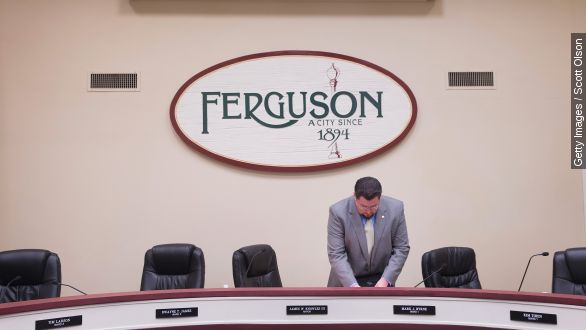 In a historic turnout, voters in the St. Louis suburb of Ferguson have voted in three new council members, two of which are black.

Up until Tuesday, five of Ferguson's six council members were white even though the city is predominantly black. Now, the City Council will have three white members and three black members. (Video via USA Today / KSDK)

One of the newly elected members, Ella Jones, also became the first black woman to serve on the council. Jones had been campaigning well before the police shooting of Michael Brown rocked the city last August.

The other newly elected black council member is Wesley Bell. He campaigned on reforming the city's police engagement with the community and revitalizing the city's neighborhoods.

The third candidate to win a spot, Brian Fletcher, is a former mayor of Ferguson and started an "I Love Ferguson" campaign to support local businesses hurt by riots and looting. (Video via St. Louis Post-Dispatch)

The shooting of Brown and subsequent protests, riots and scrutiny of the city's police department helped galvanize voters.

According to the St. Louis Post-Dispatch, voter turnout in the city of 21,000 came in just under 30 percent, or "more than double the typical turnout."

But how much will the new City Council actually be able to change?

For starters, the new council will be charged with hiring three key city positions — a new city manager, police chief and municipal judge. The positions' previous holders resigned after a Department of Justice report revealed gross abuse of power and racial discrimination.

But as The New York Times notes, the council will also have to negotiate a settlement with the DoJ to avoid a lawsuit over what was found in the report. Changes recommended by the Justice Department aren't likely to be cheap, either.

Two candidates backed by Ferguson protesters, Bob Hudgins and Lee Smith, were not elected to the council.