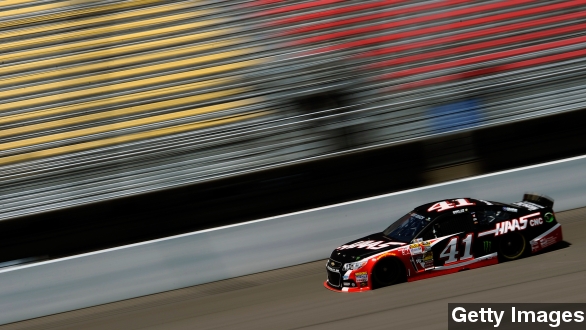 SMS
Will New NASCAR Rule Protect Drivers After Ward Death?
By Madison Burke
By Madison Burke
August 15, 2014
NASCAR says drivers are no longer allowed to get out of their vehicle during a race. But will they listen?
SHOW TRANSCRIPT

Following the death of Kevin Ward, Jr., NASCAR announced a new rule Friday, saying drivers are no longer allowed to get out of their vehicles while on the track.

The rule says, "at no time should a driver or crew member approach any portion of the racing surface or apron" or "approach another moving vehicle." (Via NASCAR)

This new rule comes just about a week after the accident that killed Ward.

Ward left his vehicle during a race on Saturday after a wreck involving fellow driver Tony Stewart. Ward then stormed onto the track while cars flew by him. He even threw his helmet at a moving car.

While he was on the track, Stewart struck and killed him with his vehicle. Stewart has not been charged in the ongoing investigation.

In a press release NASCAR says it has had a problem with emotionally charged drivers compromising safety in the past. It sites "thrown heat shields" and "hurled racing helmets" as some past offenses.

This CBS story said dramatic confrontations seem to happen all the time in auto racing.

Tony Stewart actually made headlines for throwing his helmet at a moving vehicle a couple years ago.

In Ward's case he clearly left the vehicle because he was fired up. Would a rule really have kept him inside? Most seem doubtful.

And Sporting News reports driver Brad Keselowski noted it is unlikely drivers will pay attention to the rule since it currently comes with no penalties; “Whether it's racing or society, I'm not aware of any rule or law that works without the ability to enforce it.”

NASCAR's new rule does allow drivers to leave their vehicle for emergency situations. For instance, if a driver's car is on fire.