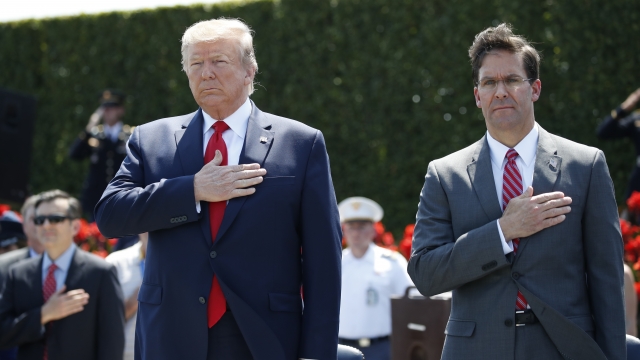 On Monday, President Trump fired Defense Secretary Mark Esper. Now, three key Pentagon officials with years of experience have handed in their resignations, raising concerns from critics that national security could be in jeopardy.

“The president ... has left the Pentagon without the institutional knowledge and the ability that it should have in this in any situation. So there is that threat of, is the Pentagon going to be able to function, given the number of people who have been removed and the lack of experience that is currently in key positions? It's a concern,” House Armed Services Committee Chairman Adam Smith told Newsy.

The three defense leaders submitted their resignations one day after President Trump tweeted that Esper had been “terminated” and Christopher Miller, the director of the National Counterterrorism Center, would be his replacement “effective immediately.”

They were replaced with people described as loyal to the president, including Anthony Tata, the new acting undersecretary of defense for policy, who has been linked to sharing conspiracy theories in tweets in 2018. In August, Tata had his nomination for a Pentagon position withdrawn due to bipartisan opposition.

“Whether you're talking about what Iran is up to, terrorist threats from overseas, there's a lot of things the Pentagon does to try to make sure that they protect us. Looking after the nuclear stockpile, a whole bunch of responsibilities, and the secretary of defense is very important,” Smith said.

Smith says the transition from the Obama administration was a lot smoother than what’s happening right now.

“A transition team from the incoming Trump administration was led into the building, was given classified information and met with all of the key agencies and said, OK, what's going on? How do we make the transition that was happening by this point? None of it is happening now. The president is refusing to allow ... Joe Biden's transition team to get that type of information,” Smith said.

Even with these concerns, Smith says the new acting defense secretary has “a decent background,” just not as much experience as those who have held the position in the past.