Will Michael Sam Be Drafted Into The NFL? Maybe Not 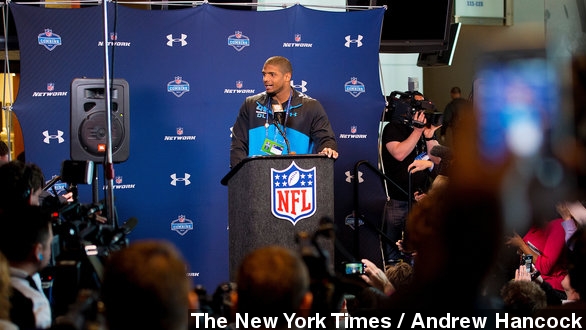 SMS
Will Michael Sam Be Drafted Into The NFL? Maybe Not

By Matt Moreno
May 7, 2014
Michael Sam could become the NFL's first openly gay active player, but the DL's draft stock has taken a hit since he came out.
SHOW TRANSCRIPT

​There are many questions about who's going where in this year's NFL draft, but one might appeal to more than just sports fans.

During Sam's senior season at Missouri, he tallied 48 total tackles, 19 for a loss; led the SEC with 11.5 sacks; forced two fumbles; and earned the SEC's co-defensive player of the year award. That's a monster season. (Via The New York Times)

After the season, Sam came out to a number of media outlets, including ESPN.

And, months ago, the high-motor DE was projected to go in the middle third or fifth rounds. (Via NBC, PennLive)

Now? Well, Sam might not be hearing his name called at all.

Directly after Sam's announcement, CBS caught flak for dropping the DE 70 spots in its overall draft rankings — in part due to his coming out. A draft analyst said teams might consider it a distraction. (Via Yahoo)

And after a less-than-stellar NFL Combine, Sam might have fallen farther on some draft boards. (Via Sporting News)

A fall that might have put Sam off the radar for many NFL teams.

FiveThirtyEight writes, "Sam's chances of being drafted are only about 50-50."

But a writer for The Washington Post says the NFL is kind of hoping Sam gets drafted this weekend too. "The NFL would avoid a major public-relations headache if, at any point this weekend, a team uses a draft pick … on Sam. …  If he goes undrafted or isn't even signed as a free agent, the NFL's message of progress and preparedness for a gay player becomes a more difficult sell."

Sam will receive the Arthur Ashe Courage Award during the 2014 ESPY Awards. The first round of the NFL draft begins Thursday night.