Will Living Glue Be A Thing? 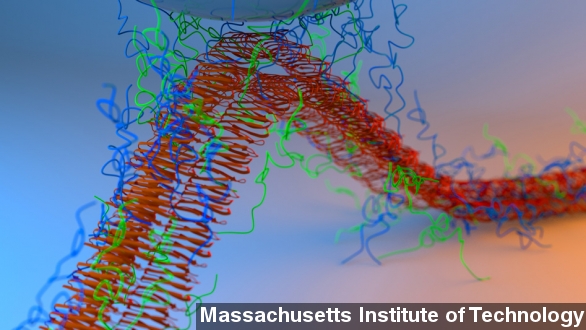 SMS
Will Living Glue Be A Thing?

Mussels — to most of us they're seafood, but to some engineers at the Massachusetts Institute of Technology, they're inspiration.

The engineers were specifically interested in the mollusks' ability to attach themselves super tightly to things underwater, and that led them to investigate. (Video via YouTube / Perry Tang)

According to MIT, the engineers identified proteins that let mussels stick, then engineered a bacteria that mixed that protein with some other bacterial proteins and resulted in an even stickier adhesive than the one the mussels themselves produce. The statement says it "could be used to repair ships or help heal wounds and surgical incisions."

They published their results in the journal Nature Nanotechnology, where they described how the big takeaway, aside from their new supersticky adhesive, is how the synthetic substance builds itself — through molecular self-assembly.

So it's not just an inert glue made out of a handful of chemicals — it's an adhesive bacteria that builds itself, which the scientists say is much closer to how these things work in the natural world.

As Tech Times points out, scientists have long taken cues from nature when it comes to engineering new technologies — citing how Velcro was inspired by the way burrs stick to fur.

But MIT in particular has been on something of a streak when it comes to nature-inspired engineering.

In the last month, MIT's robotic cheetah made headlines for the way its movement mimics that of the original African predator, and the university's synthetic octopus skin — which opens the door to advanced camouflage technologies — also made waves.

The engineers behind the adhesive say from here they hope to make a "living glue" that can identify wear and tear and ultimately repair itself. And we could also see a freaky creature Syfy movie coming out on this, too.

This video includes music from Chris Zabriskie / CC BY 3.0 and an image from Getty Images.