Will LeBron James Lose Jersey Sales By Choosing No. 23? 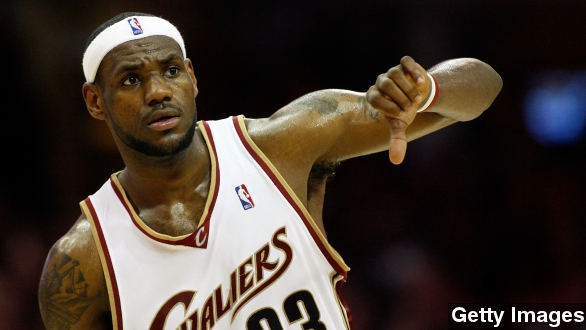 SMS
Will LeBron James Lose Jersey Sales By Choosing No. 23?

By Jamal Andress
July 27, 2014
By picking his old number, could LeBron James be missing out on big jersey sales? It doesn't look that way so far.
SHOW TRANSCRIPT

You've probably heard by now, Lebron James is going back to his original No. 23 Cleveland Cavaliers jersey. (Via Getty Images)

Sunday, King James posted this picture to his  Instagram writing, "23 it is! It's only right I go back."

The anticipation for his admittedly less important decision comes after he posted the two potential jersey numbers side by side a week earlier.

So, now that we know James is headed home and he'll be wearing the same no. 23 from his last stint in Cleveland, we're wondering, "does James stand to lose anything financially by going back to the old number?"

Contrary to popular belief, all the Lebron jerseys in Cleveland were not burned back in 2010, and as you might imagine many people still own that No. 23 Cavs jersey. (Via WEWS)

Well, according to ESPN's Darren Rovell, James' jersey decision hasn't slowed down sales one bit. According to Rovell, even before he announced his number Sunday, the NBA store sold out of James' Cavs gear. (Via Twitter / @darrenrovell)

And history says any popular player making a major switch in the NBA leads to a jump in jersey sales.

Kobe Bryant, who had the third most popular jersey in the league this year despite playing just six games, switched his jersey number from 8 to 24 back in 2007. (Via ABC / 'Jimmy Kimmel Live!')

Bryant won three NBA championships while playing with the number 8 on his chest but he didn't have the most popular jersey in the NBA until he switched his number from 8 to 24. (Via Getty Images)

Another example is All-Star veteran big man Kevin Garnett who went from not making the top 10 jersey sale list at all to being number one.

After 12 seasons with the Minnesota Timberwolves, Kevin Garnett was traded to the Boston Celtics in 2008 where he led New England to its first NBA championship in more than 20 years, that same year, Garnett had the most popular jersey in the league. (Via Getty Images)

Lebron James has had the top-selling NBA jersey for six of his 11 seasons in the NBA, and it seems the move to Cleveland is not going to slow him down. (Via CNN)