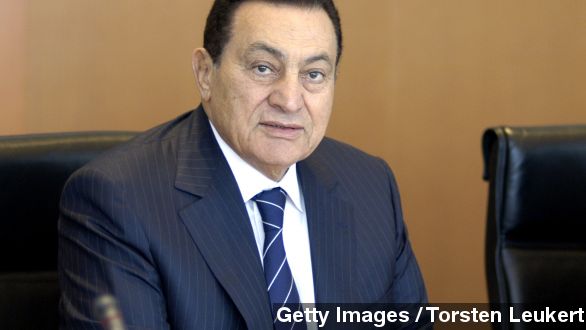 By Elizabeth Hagedorn
January 13, 2015
An Egyptian court has overturned the remaining charge against ex-dictator Hosni Mubarak, clearing the way for his possible release.
SHOW TRANSCRIPT

Four years after this uprising overthrew and imprisoned Egypt’s longtime dictator, he could soon walk free.

He and his military-backed regime were toppled during the 2011 Arab Spring protests and Mubarak was put under house arrest. (Video via YouTube / FreemanFilms)

He was later sentenced to life in prison for the murder of hundreds of the protesters who revolted against him. But a court last November overturned that conviction. (Video via ODN)

That left one remaining charge — embezzling government funds. And as of Tuesday, that charge was also overturned on a technicality.

What all of this means is, there's a really good chance Mubarak could be getting out of prison soon. And should that happen, it would mark a first for Egypt.

That's because all of Mubarak's predecessors either lived under military-imposed house arrest after leaving office or died during their presidencies.

So, a former president living as a private citizen would be a big deal — especially one once hated by so many Egyptians.

To restore law and order and crackdown on dissent, El-Sisi has effectively recreated Mubarak's draconian regime. (Video via RT)

So, while Mubarak himself might soon go free, the thousands of liberal activists and journalists el-Sissi’s regime has jailed might not be so lucky.

Among them, dual-American citizen Mohamed Soltan who’s been detained for over a year without trial, as well as the three Al Jazeera journalists sitting in prison on trumped up charges.

Egyptian media are reporting Mubarak could be released as soon as January 17.