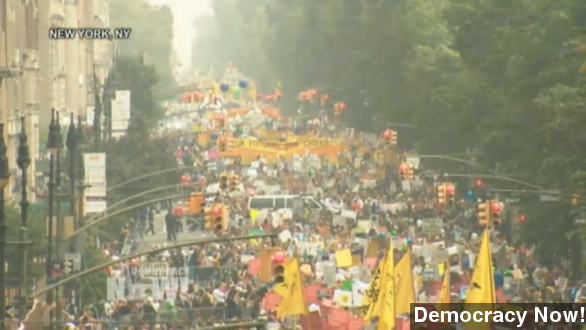 By Sebastian Martinez
September 21, 2014
Organizers of the People's Climate March and other rallies taking place in 166 countries hope to move U.N. officials to action ahead of their summit.
SHOW TRANSCRIPT

Thirty thousand people turned out for a climate change rally in Melbourne, Australia. It's part of a global day of protests ahead of the United Nations' summit in New York Tuesday.

The protests are part of a movement called People's Climate Change March, which aims to push leaders at the summit to make a meaningful agreement on capping emissions.

A number of world leaders are expected to attend the U.N. summit, including President Obama, who has often urged action on climate change.

PRESIDENT BARACK OBAMA THE WHITE HOUSE: "Climate change is a fact, and when our children’s children look us in the eye and ask if we did all we could to leave them a safer, more stable world, with new sources of energy, I want us to be able to say yes, we did."

Nevertheless, The Guardian reports the president won't be pledging any U.S. money to a fund the U.N. has put together to help developing countries cope with the effects of climate change.

One project that is expected to be agreed upon is the Africa Clean Energy Corridor, which aims to develop renewable energy across Eastern and Southern Africa. (Video via International Renewable Energy Agency)

But, as with climate treaties in the past, some are skeptical about the effectiveness a potential agreement could have in making a meaningful dent in greenhouse gas emissions.

The New York Times argues that ineffectiveness comes down the wealth gap between rich countries producing those emissions, and the poorer countries facing the brunt of the consequences. "The rich countries of the world will say how concerned they are about the damage their emissions of heat-trapping gases are causing. The poor countries ... will point out that this professed concern never seems to translate into sufficient action."

The march in New York, which organizers have promised to make the biggest in history, will be bolstered by the presence of U.N. General Secretary Ban Ki Moon, who pledged to link arms and march alongside the demonstrators. (Video via Democracy Now!)

More than 2,500 events were planned for Sunday, including that march in Melbourne and London's climate march which drew close to 30,000 people. (Video via YouTube / Matthew Bell)

The New York march was reportedly planned over the course of eight months. The U.N. summit starts Tuesday.