Will China Keep Its Promises To Latin America? 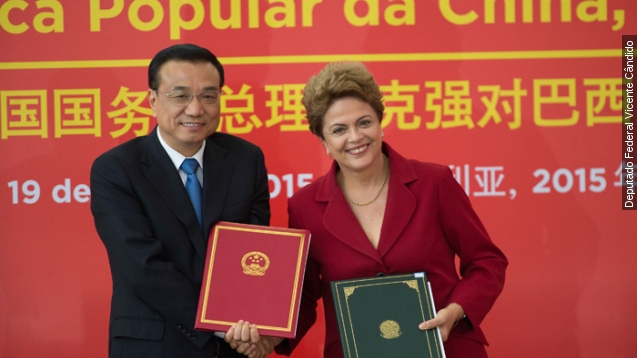 It’s been about four months since Chinese President Xi Jinping announced a $250 billion investment in Latin America over the next 10 years. Now his Prime Minister is in the region getting into the specifics. (Video via CCTV)

The plan is being called China’s “pivot to Latin America” by some analysts — a dig at the Obama administration’s own “pivot to Asia.”

Prime Minister Li Keqiang signed agreements with Brazilian and Peruvian leaders to start research on a potential railway that would stretch from the Atlantic Ocean coast of Brazil to the Pacific Ocean coast of Peru. That would make it easier for countries to ship goods by boat to China. (Video via Ministério das Relações Exteriores — Brasil)

Li also discussed other investments in Brazil, which could all add up to more than $100 billion. That included rhetoric about defense and a "new global order."

And relationship-strengthening stops in Colombia, Peru and Chile were also on the agenda. (Video via Telesur)

“If all these reports come true he’s gonna be known as Ka-Ching Keqiang by the time he leaves the hemisphere … the Chinese have already lent more money to Latin American governments over the past 10 years than the Inter-American Development Bank, the World Bank and the U.S.’s Export-Import Bank on an annual basis for big infrastructure projects, energy, mining and so forth,” Kevin Gallagher, Associate Professor of Global Development Policy at Boston University, told WBUR.

But the hard reality of these promises is yet to be seen. Often, similar promises from China go unfulfilled.

The Wall Street Journal cited a study that found “little more than a one-third [sic] of the $68.5 billion in Chinese investments announced between 2007 and 2012 were actually realized.”

The Latin America director in the Washington office of the Eurasia Group told The Washington Post, “‘There are converging interests on both sides to follow through on all these promises,’ … but he added: “It’s always good to take the numbers they announce… with a grain of salt.’”

And there are also concerns about how a transcontinental railroad would affect the environment and human rights in the region. It would cut through the Amazon, which is already threatened by deforestation and hosts many indigenous tribes, including uncontacted communities.

Those concerns are similar to the pushback against another Chinese attempt to further connect the Pacific and Atlantic — the Nicaragua Canal. The private Chinese company behind the plan has started surveying and building roads in preparation for the project. (Video via Al Jazeera)

Still, despite the hangups, it’s clear China still has its sights set on Latin America — both for the economic benefits and for regional influence.

This video includes Getty Images. And music from Brenticus / CC BY 3.0.