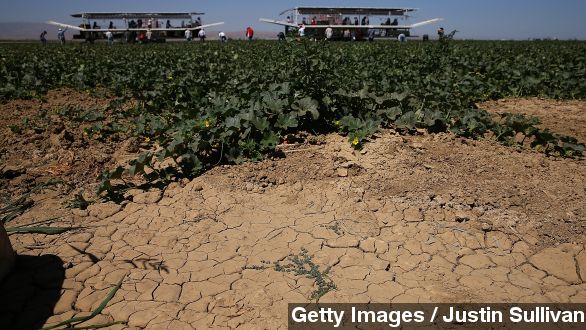 SMS
Will California Face Crop Shortages Without Federal Water?
By Jill Ornitz
By Jill Ornitz
February 28, 2015
California will go a second year without federal water for farmers. The state has been in a drought for four years, which could cause crop shortages.
SHOW TRANSCRIPT

Farmers in drought-stricken California will go a second year without federal water to help keep up crop production.

The series of canals and dams that make up the federal government's Central Valley Project used to be a main source of water for the valley's farmers.

But in the last four years of California's drought, that water has been used to help with community water shortages. (Video via PBS NewsHour)

The government is instead offering up to $50 million in drought relief for Western states. Roughly $20 million of that sum is expected to go to the Central Valley Project to help with water transfers. (Video via KQED)

Agriculture provides 20 percent of the jobs in the Central Valley Region. The Wall Street Journal reports more than 17,000 farmers lost their jobs because of the drought in 2014 alone.

And farmers aren't the only ones affected by bad droughts. Shoppers may have to pay more for their groceries because of the lack of available water. (Video via Voice of America)

According to the USDA, California is the nation's sole producer of several crops including grapes, artichokes and pomegranates. (Video via Jordan Vineyard & Winery, Longo's and YouTube / tmk9991)

The New York Times reports farmers in the valley grow more than 230 different crops. Roughly one-third of all produce grown in the United States comes from the area. (Video via America's Heartland / KVIE)

Previous droughts in California have caused price increases for the restaurant industry. (Video via Travelocity)

According to QSR Magazine, a food service specialty publication, the price of processing tomatoes used to make everything from soup to salsa jumped 30 percent during the 2008 drought.

That's because farmers don't stand to gain much from planting crops like tomatoes during periods of drought. As one farmer told QSR, growers will use what little water they have to protect expensive permanent crops like wine grapes, almonds and pistachios rather than plant cheaper crops like tomatoes or lettuce. (Video via Blue Diamond Growers and California Bountiful)