Will Any Dems Come Close To Hillary's Name Recognition? 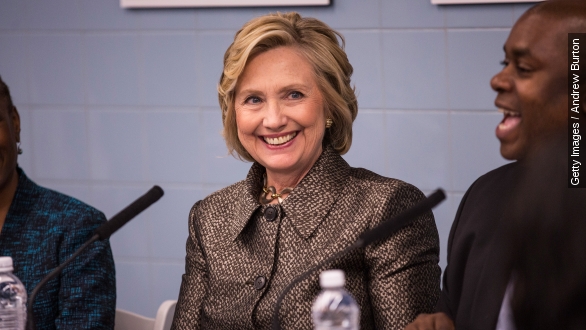 SMS
Will Any Dems Come Close To Hillary's Name Recognition?
By Jasmine Bailey
By Jasmine Bailey
April 10, 2015
Hillary Clinton’s campaign may officially kick off this weekend, and she still has one thing virtually none of her Democratic opponents can top.
SHOW TRANSCRIPT

We should finally hear an official announcement from Hillary Clinton on Sunday regarding her 2016 presidential campaign.

Now, this really doesn’t come as much of a surprise — Clinton has been a frontrunner for a Democratic bid for months.

Last week, news surfaced that her team leased a space in New York City to use as a campaign office.

Logistics for her Sunday announcement have yet to be announced, but The Washington Post says it will likely come through a video and social media announcement.

On the flip side, Florida Sen. Marco Rubio is expected to formally announce Monday in Miami he’ll go for the Republican bid.

According to left-leaning Public Policy Polling, Rubio is right on Clinton’s tail in polling.

There is something to be said about her leading the GOP, especially after the recent email controversy. (Video via ABC)

Most name recognition polls show 100% of Americans know the name Hillary Rodham Clinton. That gives her a huge leg up when it comes to other less-known Democrats. (Video via TED)

“I was at a bar with Martin O'Malley," a Fox News reporter said. "He likes to play the guitar and sing Irish music. I asked a lady in the bar, ‘What do you think about him’? She said, ‘Who is O'Malley? I'm just here because it is Thursday night."

Clinton’s campaign is expected to launch in Iowa, where she came in third place during her 2008 bid for presidency.

This video includes images from Getty Images and music from ImChilled.mp3 » Risey / CC BY NC 3.0.