Will $50B Fine From Hague Faze Putin? 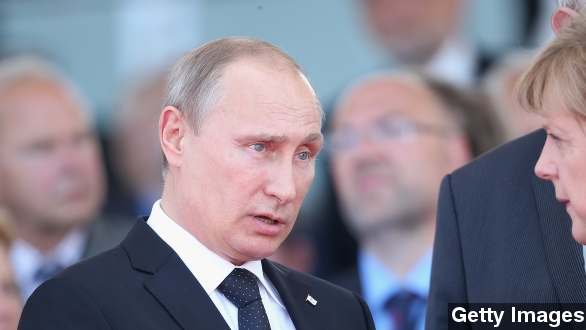 SMS
Will $50B Fine From Hague Faze Putin?

By Sebastian Martinez
July 28, 2014
The Hague has ordered Russia to pay $50 billion for illegally dissolving Yukos, a major Russian oil company. Will Russia cough it up?
SHOW TRANSCRIPT

Sanctions over the conflict in Ukraine, accusations of complicity in the downing of MH17, and now a $50 billion fine from The Hague — not exactly the best of times in Putin's Russia. (Via Getty Images)

​That's after the International Court of Justice decided Russia illegally broke down and seized the Yukos Oil Company — one of the country's biggest oil companies until the early 2000s — and ordered Russia to pay damages to the company's shareholders. (Via RT)

If you click on any number of articles on the case, you'll see this man's face: Mikhail Khodorkovsky. (Via BBC, The Wall Street Journal, The Telegraph)

Khodorkovsky founded and headed Yukos until 2003, when he was arrested, charged with fraud and quickly convicted and sentenced to 10 years in prison. (Via Euronews)

His imprisonment drew criticism internationally, with Amnesty International even declaring him a prisoner of conscience before his pardon and release last year.

The core assets of Yukos were then acquired by Russia's state-owned power companies Rosneft and Gazprom. That acquisition is at the root of The Hague's decision. (Via International Business Times)

"At the time, when they stripped out the core of Yukos, it was auctioned off for just $9 billion. ... It now has a market value of at least $115 billion, more than 10 times the core assets that were sold off by Yukos." (Via CNN)

Khodorkovsky himself won't actually get a penny directly from The Hague's decision because he gave up his stake in the company to his colleagues.

Nevertheless, Khodorkovsky, who was released just months before the Sochi Olympics, told Bloomberg: "If these guys win something and get paid, they won't owe me anything. I'll just be happy for them."

For perspective on just how hard-hitting The Hague's decision could be, those Sochi Games — the most expensive Winter Games ever — cost a little more than $50 billion too, and Russian oligarchs reportedly helped foot about half of that bill. (Via CBS)

And the decision by the International Court comes just a day before the EU is expected to impose new economic sanctions on Russia over the conflict in Ukraine. (Via The Wall Street Journal)

But do the accusations, the sanctions and now the multibillion-dollar fine have any effect on Putin's power in the country? Most analysts don't seem to think so, at least not in the short term.

"Will Putin change course? I really don't believe that he will. ... Putin is completely in charge, and he's not backing off." (Via CNBC)

It's still not set in stone that Russia will have to pay the fine. As Russian outlet LifeNews reports, officials are already planning on appealing the decision so the plaintiffs won't get an immediate payout.