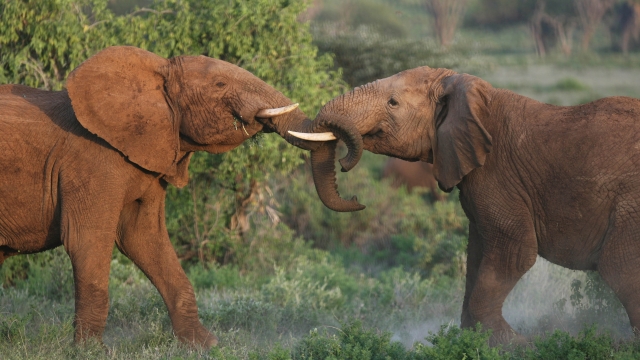 A global treaty group for managing endangered wildlife has rejected requests by four African nations to sell off vast stockpiles of ivory.

But arguments continue over measures to protect endangered elephant populations, despite the rejection of ivory sales Thursday by the 183-nation Convention on International Trade in Endangered Species.

Botswana, South Africa, Namibia and Zimbabwe argued that selling their existing supplies of ivory was a critical step for financing elephant protection as well as development programs to offset the impacts ganimals have on agriculture and communities.

Namibia's minister of environment and tourism said his country has "hundreds of tons of ivory in our banks." He argued: "It is our right to sell this and the right of the local communities to offset their costs of living side by side with elephants."

The proposed ivory sales were voted down by a margin of 102 to 82, with the U.S. and European Union among those in opposition. While proponents argued the measure could have aided conservation, opponents argued it would have supercharged the illegal ivory trade.

Ginette Hemley of the World Wildlife Fund said: "The divisive nature of the debate underscores the differing challenges and approaches to elephant conservation across Africa."

According to the Great Elephant Census wildlife survey in 2016, there were 350,000 elephants remaining in 18 African countries. But the elephant population had dropped by more than 140,000 from 2007 to 2014 due to poaching and loss of habitat.