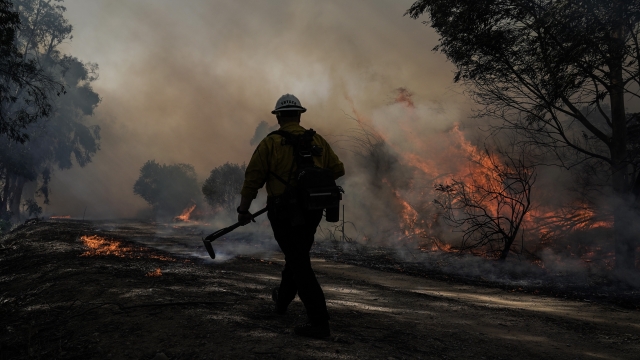 Wildfires are once again ravaging southern California. The fast-moving blazes near Irvine and Yorba Linda have left more than 100,000 people under evacuation orders. And at least two firefighters have been injured.

The Silverado and Blue Ridge fires cap a summer of record wildfire activity in California. Some residents reportedly described the smoke-filled skies from the twin blazes as resembling "doomsday."

Southern California Edison, a utilities provider, told state authorities that a power line may have ignited the fires. Subsequently, hundreds of thousands of customers were without power on Monday night.

Another contributing factor to the fires is climate change. Environmental scientists say California has become much drier, making trees and other plants more flammable.

In Northern California, nearly two dozen wildfires were reported on Sunday night and Monday but all were contained without serious damage.

The fires this year have already scorched 6,200 square miles of land in California and killed at least 31 people. They've also destroyed more than 9,000 homes, businesses and buildings statewide.