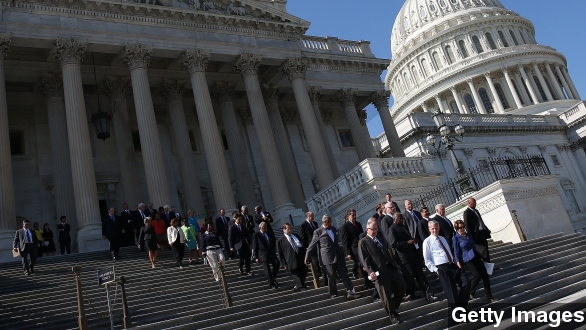 By Ben Lawson
July 26, 2014
An IP address within the House of Representatives was banned from editing Wikipedia articles for 10 days after it made some questionable changes.
SHOW TRANSCRIPT

An IP address from a staff member in the U.S. House of Representatives has been temporarily blocked from making edits to Wikipedia articles after some of its changes were deemed disruptive.

The Twitter bot @congressedits was created earlier this month to track what changes were coming out of congress and, well, it found some pretty interesting edits coming from an IP address for House staff.

An anonymous user from the House edited the page for "moon landing conspiracy theories" to say the Cuban government was behind spreading rumors that 1969's moon landing was a hoax. (Via NASA)

For Wikipedia's article on the Nevada Test and Training Range, a House staff computer included that: "In spite of allegations to the contrary, the claims that extraterrestrials are housed in this facility are completely unsubstantiated." (Via U.S. Air Force / CC BY-NC 2.0)

And they added this note to the bio on controversial radio host Alex Jones: "Following his appearances on Russia Today, there were allegations that he was a disinformation agent with ties to the Kremlin." (The Alex Jones Show)

But the unknown user from within Congressional offices isn't just trying to stir up controversy or disprove the existence of aliens. He or she also made grammatical and organizational corrections on dozens of articles and added other more trivial information as well.

The editor wants you to know that Heritage Foundation fellow Brian Darling was involved in "breeding rare long haired cats" while growing up. (Via Wikipedia / Brian Darling)

It should be pointed out that the user could be anyone working within the House of Representatives — staff member or elected official. (Via Getty Images)

When Mediaite published an article on the questionable edits, it speculated the culprit was a "an intern with questionable judgment" and asserted the editor was a man, which apparently he or she did not like.

Because the person editing from the banned IP address then edited the Mediaite Wikipedia page to read "Mediaite is a sexist transphobic news and opinion blog ... that automatically assumes that someone is male without any evidence."

Wikipedia Founder Jimmy Wales was not exactly grateful to @congressedits for pointing out the changes. He told the BBC it's counter productive and it actually provokes people into further disruptive edits.

The idea of tracking Congress's edits is far from original. There are dozens of twitter bots that tweet edits to Wikipedia pages from government agencies such as the CIA, European Parliament, NATO and NSA.

The ban only affects one IP address within the House and it's unclear how many staffers that could affect but Wikipedia has received one complaint arguing it's not fair to punish the whole building for the actions of a few — or one.