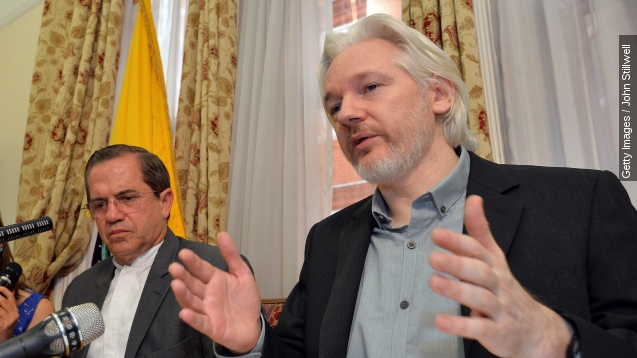 It's officially been three years since WikiLeaks founder Julian Assange took refuge from Swedish authorities inside the Ecuadorian embassy in London. And WikiLeaks commemorated the anniversary the only way they know how — a massive document dump. (Video via Ecuadorean Foreign Ministry)

Then on Friday morning, the site claimed to have over 500,000 cables from Saudi Arabia's Ministry of Foreign affairs, which it's releasing in batches. WikiLeaks later published a story derived from the first batch of documents, detailing Saudi Arabia's efforts to manipulate the media.

In addition to their news value, WikiLeaks likely intends the back-to-back leaks to remind people about the kind of service it provides to the public — and act as a bit of a PR boost for Assange, who's probably sick of the embassy scenery by now.

Assange has been hiding out in the Ecuadorian embassy since 2012 to avoid extradition to Sweden; the country wants to question him over rape and molestation allegations filed against Assange in 2010.

Whatever the result of that case, Assange's supporters fear extradition to Sweden could eventually leave Assange in front of a U.S. court on espionage charges, which could carry a lengthy prison sentence.

Ecuador's president is in no hurry to let that happen.

"Assange can spend the rest of his life in our embassy in London, and he will always be welcome," President Rafael Correra told Euronews.

But being cooped up in the embassy is taking its toll; last August, WikiLeaks sources reported Assange was suffering multiple health problems due to his confinement. And London police estimate they've spent over $17 million guarding the embassy over the years. (Video via Sky News)

Sweden's also been dragging its feet about Assange's prosecution; prosecutors recently postponed a planned interview with Assange in London after getting caught up in red tape.

But the prosecution needs that investigation to move forward sooner rather than later; some of the charges against Assange expire in August.