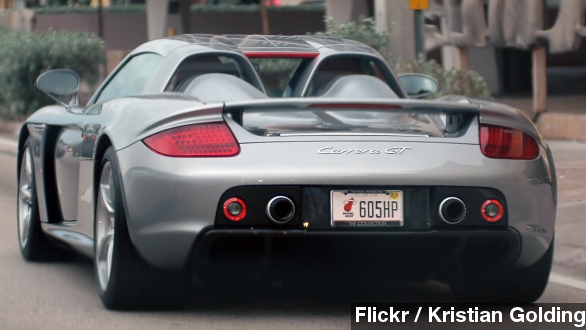 SMS
Widow Of Driver In Paul Walker Crash Sues Porsche
By Megan McLeod
By Megan McLeod
May 13, 2014
The wife of Roger Rodas, who died with Paul Walker in a car crash last December, is suing Porsche. Kristine Rodas says the car had faulty mechanics.
SHOW TRANSCRIPT

The widow of Roger Rodas, the man who died with actor Paul Walker in a fiery car crash last December, is now suing the maker of the car they were riding in.

Monday TMZ reported Kristine Rodas filed a lawsuit against luxury sports-car maker Porsche. In the documents filed with the Los Angeles County Superior Court, she claims the Porsche Carrera GT the two were riding in had faulty mechanics.

Back in November, the star of the "Fast & Furious" movie franchise and his friend Rodas went for a spin after an event for Walker's charity. (Via ABC)

"Flames and black smoke billowed from the wreckage. The Porsche Carrera GT exploded in flames after slamming into a tree and a light pole." (Via KABC)

According to The Hollywood Reporter, Kristine Rodas alleges the Porsche Carrera had a faulty part in its suspension, which caused the car to careen off the road. She also says the sports car was not equipped with the proper safety features in the gas tank or a roll cage to prevent such a violent crash.

But the report from the California Highway Patrol and the L.A. County Sheriff's Department paints a much different picture.

According to the Los Angeles Times, the crash report from March said her husband was traveling at speeds up to 93 miles per hour, about twice the speed limit, prior to the crash.

The crash report also reveals investigators consulted with Porsche technicians to arrive at this conclusion. The publication adds the car is known to be difficult to drive. (Via Porsche)

The New York Daily News reports Kristine Rodas is not the first widow to sue Porsche. Back in 2005, Internet pioneer Corey Rudl's wife won hundreds of thousands of dollars after he died as a passenger in the same model.

Kristine Rodas is being represented by celebrity attorney Mark Geragos.