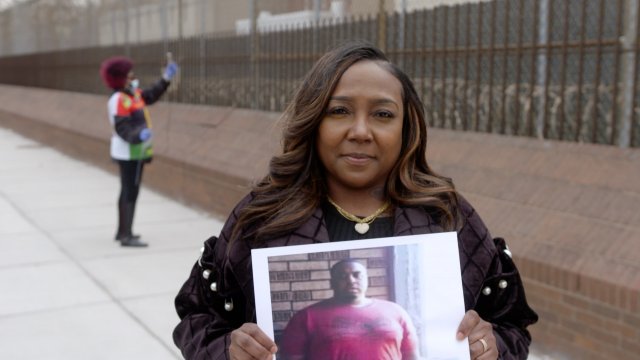 SMS
Widow Of Cook County Jail Detainee Who Died Of COVID-19 Speaks Out
By Jamal Andress
By Jamal Andress
April 29, 2020
Nickolas Lee, Cassandra Greer-Lee's husband, got a sore throat March 29, was taken to the hospital on April 6 and died on April 12. He had COVID-19.
SHOW TRANSCRIPT

The Cook County Jail south of Chicago has become one of the nation’s COVID-19 hotspots. Nearly 500 inmates have tested positive. Six have died. Cassandra Greer-Lee’s husband, Nickolas, is one of them.

GREER-LEE: "I'm more introverted. My husband is more extroverted. So I'm like a 'house' type of wife. We watched movies but what we really enjoyed doing was going to the lakefront and just sitting just watching the sun come up."

GREER-LEE: "My husband was 42. We had a lifetime still left to live together and to be happy with one another. He had a chance to come back out into society and be a productive citizen."

Nickolas Lee complained there were multiple people showing symptoms on his floor. Cassandra Greer-Lee says she made 132 phone calls to the authorities to try to get her husband moved to a different area of the jail. Lee developed a sore throat March 29, was taken to the hospital on April 6 and died on April 12. He was 42.

Like so many others, Greer-Lee was not permitted to see her husband before he died for fear of contagion. They spoke for the last time the night before he died.

GREER-LEE: "He was having difficulty breathing. So he would say a few words and he was on a CPAP machine. So he would put it back on and I just told him just just lay back and relax. Just listen to me. I prayed with him. I encouraged him. I told him to keep fighting for me because I need him and I still do, but God saw fit for something different.

Lee was arrested in October 2016 and was being held without bond awaiting trial. His charges included armed robbery, aggravated battery to a peace officer and felony gun possession.

GREER-LEE: "If my husband did something wrong and a judge found that he was guilty, he would have had to do whatever time that judge said. But did it warrant him to die? It didn't warrant him to die. I wasn't one of the people saying, 'Release my husband because it's a pandemic.' No, I wasn't. I wasn't saying release him. I was saying protect him."

On Monday a federal judge ordered the jail to move most detainees into single cells. The sheriff has until Friday to comply.