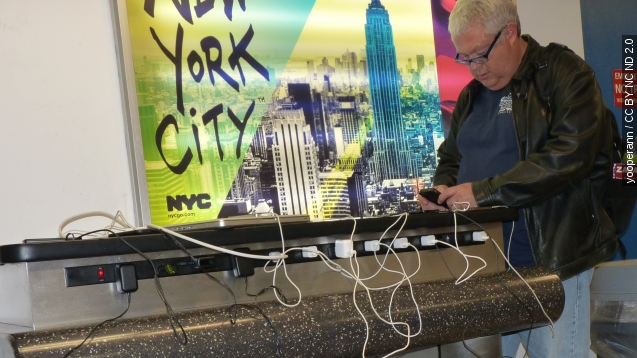 SMS
Wi-Fi Might Charge Our Gadgets In The Future
By Katie Link
By Katie Link
July 15, 2015
Researchers are exploring how Wi-Fi signals can charge our wireless devices from several feet away. So when can we use this tech in our homes?
SHOW TRANSCRIPT

It's only been around for about 15 years. And yet, many of us can't imagine functioning without it. In our tech-dominated lifestyle, Wi-Fi is king.

But Wi-Fi might still be in its infancy. After all, the wireless networking standard has evolved rapidly.

There are a lot of ideas about where Wi-Fi is headed next, from ubiquitous coverage to Wi-Fi-compatible microchips we implant in our pets. (Video via American Veterinary Medical Association)

And one new step coming soon: Wi-Fi that can charge your gadgets.

A group from the University of Washington is developing technology to allow us to boost our batteries without plugging in. They're calling it "power over Wi-Fi," or "PoWi-Fi" for short.

The technology uses two access points: a router and custom sensors. The sensors harvest radio frequencies and change them to direct current power. By splitting your Wi-Fi channel on the router into three rather than one, the group can ensure strong power delivery without disrupting the connection.

So in layman's terms, you may soon be able to charge your gadget from up to 28 feet away without slowing down the signal you're receiving while you scroll through your Instagram feed.

So will it be safe to ditch that charger once and for all? Not yet.

The team has installed the technology in six Seattle-area homes. During the trial phase, one household found the added technology sped up connectivity, while another had trouble viewing a YouTube video. But overall, the test was a success.

The team has also tested it with cameras and rechargeable batteries. They've founded a startup to help turn their research into an actual product. But for now, there's no time frame for when we might see the technology in our own homes, corner cafes or workplaces.