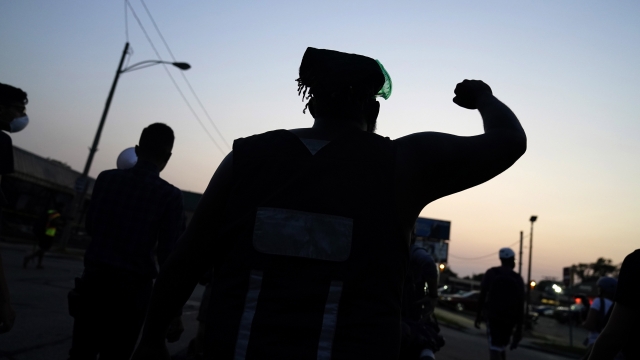 Lauren Magarino: "Demonstrations are expected to continue nationwide after the police shooting of Jacob Blake. Joining us from Kenosha, Wisconsin, is Newsy is Jamal Andress. Jamal?"

Jamal Andress: "New details were released by the Justice Department around the shooting. What have we learned? Well, this is the first time we got some real information about what happened before that viral video picks up and again. This is all coming from the Wisconsin Department of Justice, the group that's investigating the shooting. They investigate all police- involved shooting. A third party has to investigate those types of incidents in the state of Wisconsin.

"So, according to the Wisconsin Department of Justice, police were called to the scene after a woman called the police, saying that her boyfriend was on the premises and wasn't supposed to be there. Now they did not clarify whether that boyfriend in question is, in fact Jacob Blake, but their story picks up with trying to arrest Jacob Blake, and essentially, they say the Kenosha Police tased Jacob Blake, and he continued to walk toward his vehicle. And obviously, as you know, that is where the viral video picks up the other detail.

"The major detail that came out of this press conference yesterday was the fact that Jacob Blake had a knife in on the scene. Now, police say they found that knife on the floorboard of the driver's seat. They did not say whether or not he was reaching for the knife, whether he pulled the knife or whether he had it, um, on his person throughout the altercation. But according to Wisconsin Department of Justice, Jacob Blake himself admitted that that he had a knife on the scene. So that was part of what we learned.

"Lastly, Officer Rusten Sheskey has been identified as the officer on the scene who fired seven shots. He was the only officer to fire and there were three different officers on the scene. All three of those officers are now on administrative leave."

Magarino: "We've seen protests in the town all week. Can you take us through what happened overnight?"

Andress: "Well, things remain peaceful overnight. This is the first time since Sunday that there hasn't been any tear gas destruction or looting throughout this. You know what has been obviously a chaotic week? People did march in protest, protest well passed the curfew, but, um, things remained peaceful throughout. Obviously, the governor had an influx of National Guard officers. It went from 1-25 to 50 now to 500 that air here and available to provide support to Kenosha police in the event of destruction. Now the other thing I want to mention, um, we also didn't see any organized militia groups.

"Obviously, last night, obviously, the night before last, there was that terrible incident that left two people dead and one person injured that involved sort of organized militia groups roaming the streets of Kenosha. That census it got was here before we left. Actually, when protesters were kind of in this town square area and barbecuing and essentially just being here on the premises. And an armored truck sort of hopped a curb and rode up in front of us, where we were about to go live on the air with guns drawn. Obviously, protesters approached these folks that were standing in that general area and nothing came of it. But that was the census that got overnight, According to people who were here on the scene throughout the overnight hours. Each time I talked to you, you know, it's a different scenario There are different people, different movements, different forms of protest.

Magarino: "And, I mean, clearly, the story will continue to develop your on it. Newsy's Jamal Andress. Thank you."