Why Your Boss Should Let You Sleep In 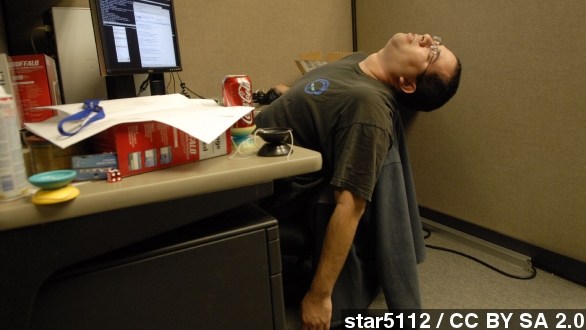 SMS
Why Your Boss Should Let You Sleep In
By Jasmine Bailey
By Jasmine Bailey
December 17, 2014
According to research out of the University of Pennsylvania, waking up for work is the biggest factor that causes Americans to lose sleep.
SHOW TRANSCRIPT

Feeling a little sleepy, like maybe you didn't get enough shut-eye last night? Well, now you can add one more thing to your list of complaints about work — it's a sleep thief.

That's according to a study out of the University of Pennsylvania that claims work is the ultimate killer of sleep, keeping us from getting those recommended seven to nine hours.

"They took a look at the sleep patterns and work habits of more than 124,000 Americans. ... Those who got to work before or at 6 a.m. only got six hours of sleep a night," WBZ-TV explains.

The researchers found work is the No. 1 thing Americans forfeit sleep for, with those who work more or earlier hours sleeping less.

To combat that loss of sleep, the researchers recommend pushing back work and school start times.

"A 10 a.m. start would give millions of workers seven to nine hours of sleep, which is what medical experts recommend for optimal health, productivity and daytime alertness," says a WAGA reporter.

One researcher told HealthDay: "Asking for flexible hours might help. ... You could argue that you will be more productive if you are well-rested, and research would back you up."

But if you do decide to ask for better hours, be prepared for the inevitable comeback: Why aren't you going to sleep earlier?

Like this chart from The Washington Post shows, you can't blame all that missing sleep on work. There are other factors to consider, like socializing, playing games and, of course, watching TV.

So if your boss won't budge on your work schedule, maybe you could try making more of an effort to shut off the TV and stick to your bedtime.