Why You Shouldn't Host A Debate On A Saturday Night 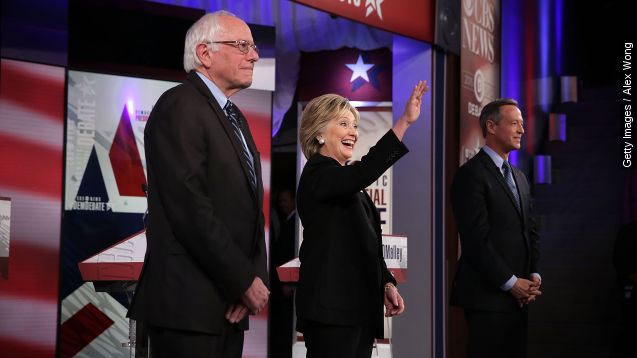 SMS
Why You Shouldn't Host A Debate On A Saturday Night
By Katie Link
By Katie Link
November 15, 2015
The second Democratic debate held on Saturday brought in a low number of viewers compared to others this year.
SHOW TRANSCRIPT

A lot of people stayed home and watched TV Saturday night. In fact, 8.5 million people tuned into CBS to watch the second Democratic debate. But the viewership wasn't nearly as high as the other debates this year. (Video via CBS)

So Saturday's viewership may seem low, but those numbers are historically massive. Back in 2008, CNN broke a record after 4.9 million people tuned in for the presidential primary debate. Now, just seven years later, a number almost double that is seen as small. (Video via CNN)

So why did this weekend's debate struggle to keep up? A few factors could've contributed.

First of all, it aired at 9 p.m. Eastern Time on a Saturday night. We're guessing a lot of would-be viewers probably had things to do.

Secondly, the pool of Democratic candidates is shrinking. Watching three people on stage is a little less entertaining than watching 15 duke it out.

But a report out of the University of Pennsylvania indicates the "watching" is the biggest problem here. As media evolves, research suggests debates should evolve too. According to the report, "more than 60 percent of the voting age population watched a presidential debate on TV in 1960. In 2012, the most viewed presidential debate had 28 percent of the electorate watching."

The candidates were quick to blame the Democratic National Convention for the low numbers. O'Malley's campaign manager said, "We can’t fool ourselves — the Republicans are eating our lunch in terms of attention and viewership because of the unprecedented, unilateral, and arbitrary way the DNC Chair determined this schedule."

The next Democratic debate is scheduled for Saturday, Dec. 19.