Why You're Seeing Lightning Bolts In Your Facebook Feed 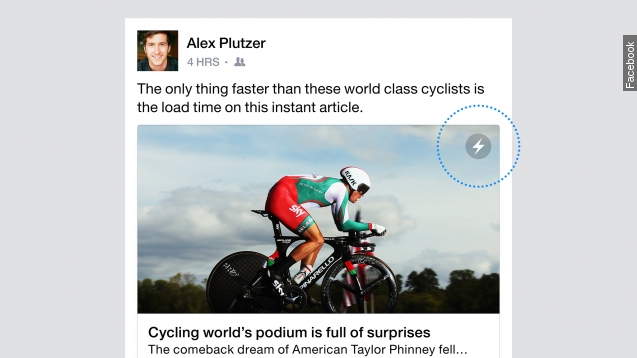 SMS
Why You're Seeing Lightning Bolts In Your Facebook Feed
By Mikah Sargent
By Mikah Sargent
October 20, 2015
You might spot a lightning bolt or five in your Facebook news feed. That bolt indicates an Instant Article, a new feature from the social media site.
SHOW TRANSCRIPT

As you scroll through your Facebook news feed, you might come across a news article with a lightning bolt in the top right corner. Take a deep breath — Facebook's changing your news feed again.

Lucky for us, this change makes things load faster. The lightning bolt means the content you see is an Instant Article — y'know, that thing Facebook's been hyping for a while now. Facebook says Instant Articles load 10 times faster than a typical Web page, hence the "instant" part.

So how does it work? First, you should know Facebook is really good at housing and displaying images, video, text and more. And it's also really good at sending you that media as quickly as it can.

With Instant Articles, publishers can use the same super-fast technology Facebook uses to load your media. If you tap on an Instant Article, it'll load as quickly as that photo in your news feed of your friend's brunch.

"Videos that come to life as you move through the story, images that invite you to look closer and take in the details," says the narrator in a Facebook Instant Articles video.

Instant Articles are only available to iPhone users for now, but the company says they'll be coming to Android later this year. (Video via Apple)