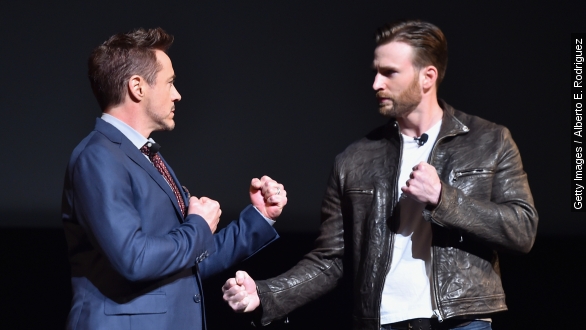 SMS
Why Won't Marvel Call 'Civil War' An 'Avengers' Movie?
By Ben Lawson
By Ben Lawson
May 7, 2015
Marvel doesn't want to call "Captain America: Civil War" an "Avengers" movie despite the long list of superheroes in its cast.
SHOW TRANSCRIPT

You might not have to wait that long for another Avengers movie after all. That's because "Captain America: Civil War" will have so many superheroes in its cast list, it might as well be called "Avengers 2.5."

Marvel revealed Thursday pretty much every superhero who has been in the Marvel Cinematic Universe so far will appear in "Civil War," minus Mark Ruffalo's Hulk and Chris Hemsworth's Thor.

Additionally, Chadwick Boseman's Black Panther will be making his first appearance in the movie, and Paul Rudd's Ant Man will show up, as well.

And if that doesn't sound like an "Avengers" movie to you, then listen to the plot Marvel provided along with the cast list.

"Civil War" will pick up where "Age of Ultron" left off, with Captain America leading the Avengers. The details include a new villain and a call for government oversight that will fracture the team somehow, hence the title "Civil War."

No one seems to have missed that this sounds more like an "Avengers" film than a Captain America solo film.

So why not call it that? It's not like Steve Rogers won't attract a strong audience on his own, but the first two "Avengers" movies have made buckets of cash.

The release date could have a lot to do with why Marvel won't call "Civil War" an "Avengers" movie. The film is scheduled to premiere May 6, 2016, which is just a year after the last "Avengers" film hit theaters.

So maybe Marvel is trying to avoid wearing out the "Avengers" brand before it's big, two part finale in 2018 and 2019 with "Avengers: Infinity War." Plus, it will have been two years since audiences got a "Captain America" title, so Marvel could be thinking audiences are ready for another one.

Whatever Marvel's reasoning, they aren't letting us mere mortals in on it.