NFL Won't Be Happy About Will Smith's New 'Concussion' Movie 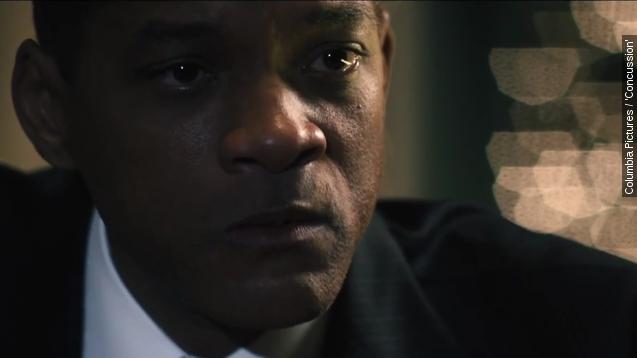 Monday, Sony released a trailer for Will Smith's newest film, "Concussion." And the studio expects the project will make the NFL very, very angry.

"The NFL does not want to talk to you. You turned on the lights and gave their biggest boogeyman a name." (Video via Columbia Pictures / "Concussion")

In the movie, Smith plays Dr. Bennet Omalu, the man who discovered chronic traumatic encephalopathy, or CTE. The condition is caused by repeated blows to the head and can cause confusion, depression and progressive dementia.

The film follows Dr. Omalu's struggle to make the NFL recognize the medical issues playing football can cause down the road.

GQ described Mike Webster, the first player Omalu encountered with CTE, as "occasionally catatonic, in a fetal position for days." The league only gave him $3,000 per month, the minimum disability.

Webster had five doctors, one of whom the NFL appointed, diagnose him with closed-head injuries related to football. Still, the league wouldn't budge. After years of poor financial decisions, possibly related to CTE, he lived in his truck until he died of a heart attack in 2002.

Omalu requested to study Webster's brain. When the CT and MRI scans turned up nothing, he paid out of his own pocket for specialized staining that revealed the damage concussions can cause over time.

Dr. Omalu expected the NFL to appreciate the results of his work. But soon after his findings were published, the league attempted to discredit him.

But the groundbreaking work he did couldn't be completely swept under the rug. CTE has been increasingly prevalent in the news.

Earlier this year, the NFL reached a settlement with more than 5,000 former players following a class action lawsuit claiming the league hid the dangers head trauma poses to players.

Even with the legal setback, the NFL has a lot more to lose over the brain injury discussion. The league reportedly makes more than $9 billion per year, but knowing the job may be slowly killing players could harm revenue and deter players.

And "Concussion" probably won't help with that concern.

Former 49ers linebacker Chris Borland retired after his rookie year, citing fears about concussions. After his decision to leave football, he viewed a screening of the film, and afterward, he reportedly "was literally, physically shaking. Shaken and shaking."

But the filmmakers were apparently well aware that the movie would have an effect on the world of football.

Last year's Sony email leak revealed a representative for Will Smith predicted, "Concussion is going to piss off the NFL ... We are going to be facing a powerful adversary that may try to prevent the movie from being made—and, failing that, to ensure that as few people as possible see it or take it seriously."

But with the intense media scrutiny on CTE and Will Smith's star power, it looks like Dr. Omalu's work won't be stifled any longer. "Concussion" is scheduled to open Christmas 2015. (Video via Columbia Pictures / "Concussion")

This video includes images from Getty Images and Akira Ohgaki / CC by 2.0.