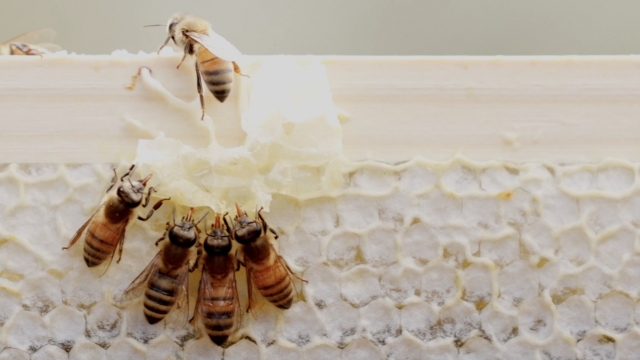 You've likely heard it a time or two before: to be as busy as a bee.

"They are foraging from sunup to sundown," said Carmen Weiland, a beekeeper in Eagle, Colorado. "They are going back making hundreds of trips all day every day until they die."

They are working the entirety of their lifespan to provide for their hive, but they also support humans without even knowing.

"They are the only insect that I know of that can actually help heal us," Weiland said. "It's my newfound love at 50. I've been doing this about five or six years."

But the bee population is declining, and a new study found that without them, wild crops will be severely impacted in just 10 years. In the U.S. alone, beekeepers lost 45.5% of their managed honeybee colonies from April 2020 to April 2021.

Bees are key to our environment and have more benefits than some people realize.

Weiland loves to educate people on things they likely don't know about bees and honey because even beekeepers are constantly learning new things.

"The more I read I felt like the less I knew, but it probably is the biggest rabbit hole I've ever dove into," Weiland said.

Bees have become a backbone of our environment. Experts point out how crucial they are to biodiversity in and of themselves, but now with their continued population decline, they are finding how quickly disastrous effects on plants can happen.

"They have become an important part of our ecosystem; they are a keystone species. So, there's a lot of animals and us that rely on them to pollinate food so we, in turn, can eat everything we've gotten used to eating," Weiland said.

That's just the beginning. Their honey is more than just a tasty condiment.

"A lot of work goes into making honey, so when you get that little jar at the store, that's hundreds of bees making that jar. So, that's why I never like to waste even a drop. These girls work hard," Weiland said. "Yes, I'm allergic to honey. I'm getting better. I'm able to eat it more because I do a little bit every day."

Her allergy has never gotten in the way of seeing the benefits. Studies suggest it can even help with depression and anxiety.

"It's been proven for your skin for helping heal, for hydrating," Weiland said.

From the hive to the shelf, the honey you purchase from a beekeeper is far different from what most people purchase in a store.

"Honey is one of the top three foods that's adulterated. A lot of times, it's coming mixed with rice syrup and it's really hard to detect," Weiland said. "If it's from the grocery store, it's in the bear that everybody has seen, most likely it's pasteurized, and pasteurized honey is pretty much eating sugar. There's no enzymes, there's no minerals, there's no vitamins left."

It may be more expensive to buy pure honey, but Weiland says it's well worth it.