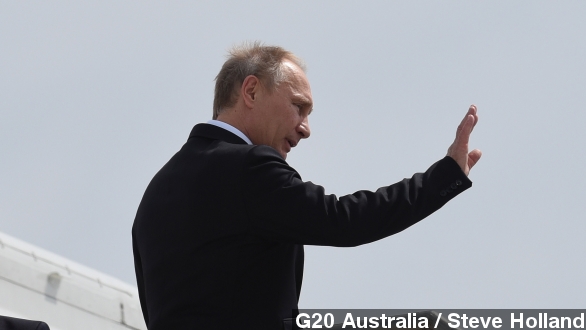 Last week’s G20 summit made it painfully clear what a bulk of world leaders think about Russian President Vladimir Putin.

Putin was scolded by everyone from President Obama, to British Prime Minister David Cameron to Canadian Prime Minister Stephen Harper. (Video via Bloomberg)

Granted, that was followed by a spell of conciliatory koala hugging with Australia’s Prime Minister Tony Abbott, but the message got across.

But that last point doesn’t jibe at all with how Putin seems to view himself: as a thoroughly law-abiding member of the global community.

Putin’s legalistic world view is evidenced in his speeches and official statements, where he meticulously points to legal precedents for his actions, and it’s reinforced by state broadcasters. (Video via President of Russia)

RT’s Oksana Boyko said, “If you look at his policies and his statements he’s actually very meticulous, very particular about upholding the law… He pays a lot of attention to making sure law is followed in Russia.”

As analyst Masha Lipman points out in The New Yorker, this habit was on display during Russia’s annexation of Crimea, when Putin used the country's quickly-held referendum as justification for the annexation.

“Egregious lawlessness underneath legal forms has become an inherent element of Russian life. … The pseudo-legality is simply a way to demonstrate who has the power.”

Putin has cited Western countries’ recognition of Kosovo’s independence as a legal precedent for Crimea’s annexation and argues the West is hypocritical in recognizing Kosovo but not Crimea. (Video via BBC)

A good example of Putin’s legalism is how he dealt with some Crimeans' resistance to the annexation.

Aiming to crack down on protests, many of which were carried out by the region’s native Tatar ethnic group, he pushed a law through the Russian legislature preventing Russians, including Crimeans, from advocating the violation of Russia’s territorial integrity. (Video via Radio Free Europe/Radio Liberty)

Interestingly, Putin received a top North Korean official in Moscow Wednesday, and afterward called for more collaboration between Russia and the rogue state. (Video via Arirang)