Why Trump Told His Base The US Needs Foreign Workers 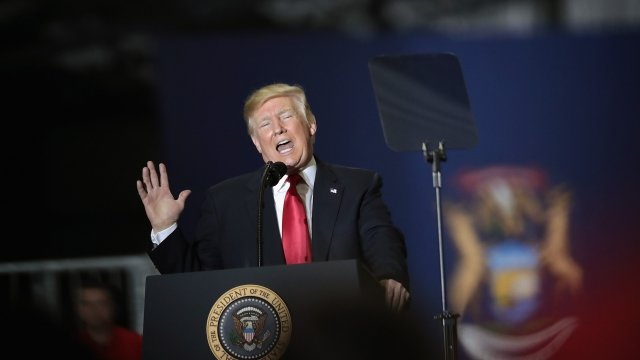 If this sounds like an extraordinary statement from Trump, it's because it is. Trump said that while talking to his supporters during a campaign-style rally in Michigan two weeks ago, and that makes his pro-immigration argument even more remarkable.

Trump's statement drew some criticism from conservative outlets but was mostly overshadowed by the simultaneous controversy around comedian Michelle Wolf's speech at White House Correspondents' Dinner.

So, why this surprising remark from the president? And what is this H-2B visa he's referring to?

The H-2B immigration program allows some U.S. businesses to hire low-skilled foreign workers for seasonal jobs that no Americans seem to want.

The capped program is highly coveted by seafood processors, landscapers and tourist businesses, which have relied on it for years. But with the U.S. unemployment rate at a 17-year low, they say that the cap is too low and that it's near impossible to find Americans who can or want to do the low-pay, manual jobs.

Opponents of the program say employers should try harder to hire Americans and raise wages if necessary.

A notable example of the labor shortage is the ongoing Maryland's crab industry crisis. You might also remember news stories about Mar-a-Lago resort and other Trump businesses applying for hundreds of these guest worker visas.

"You cannot get help during the season. The season goes from, like, October to March. It's almost impossible to get help," Trump told CNN during his campaign. "And part of the reason you can't get American people is they want full-time jobs."

More than 140,000 requests have already been submitted this year, but the program only grants 66,000 visas a year.

While Congress recently declined to permanently lift the cap, it did give the White House authority to issue almost 70,000 extra visas for the summer. Homeland Security Secretary Kirstjen Nielsen reportedly told lawmakers she'll soon open 15,000 of these extra visas.