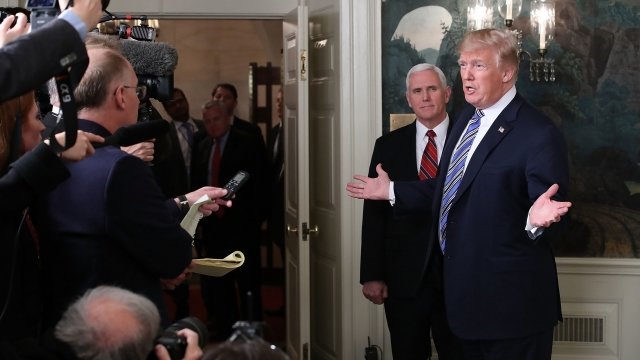 President Donald Trump's tweet that said he might veto the bill put Washington, D.C., on edge as the funding deadline approached.

President Donald Trump had threatened on Twitter to veto a massive spending bill that would fund the government through September.

He complained about the lack of time between the bill passing Congress and his deadline to sign it — only a few hours on Friday before a shutdown at midnight. Trump reluctantly signed but warned Congress he wouldn't OK a similar bill again.

Trump's tweet spooked Washington because most lawmakers were already out of town before a two-week recess.

Trump said his main criticism of the bill was it didn't mention Deferred Action for Childhood Arrivals, which aims to help immigrants brought to the country illegally as kids. The bill also allowed only a portion of funding to go to Trump's long-promised border-wall project with Mexico, but it barred the construction of solid concrete walls and instead only allowed fencing, aircraft, sensors and other surveillance tools.

Trump says he ultimately signed the bill in the name of national security; the legislation gave a large amount of money to the military.