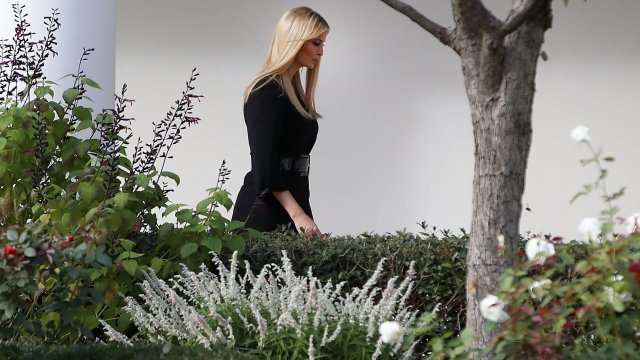 Ivanka Trump is under fire for using a personal email address for government business while serving in her father's administration. Sounds familiar, right?

Her father, then-candidate Donald Trump, made Hillary Clinton's use of a private email server while secretary of state a central focus of his campaign. He used it to drill home the idea that Clinton was hiding her communications and risked sending sensitive information through non-secure channels. As expected, the president's daughter is facing some sharp comparisons to the former Democratic presidential nominee, but there are some differences between the two.

Ivanka Trump's lawyers told the Washington Post, "Ms. Trump did not create a private server in her house or office, no classified information was ever included, the account was never transferred at Trump Organization, and no emails were ever deleted."

Clinton sent thousands of official emails through her private server while at the State Department. Some were found to have contained classified information, and a trove were deleted. According to the Washington Post, Ivanka Trump sent roughly 1,000 emails pertaining to the White House since she began working there in March 2017. But less than 100 of them were directly related to government policies and official business.

Still, both Ivanka Trump and Clinton claim not to have been familiar with the rules. They also said they turned over emails, but the Post says both used attorneys to decide which emails to save as official business.

Here's why it matters: The Presidential Records Act requires all official records from administrations be preserved. This includes emails. Back in 2014, Congress also decided that if you use a different, unofficial account, you need to copy an official account so the record is kept. Trump says the emails were with official government accounts, therefore saving all correspondence. Clinton said the same.

Experts also say a private email is more vulnerable than a government email address. Even if Clinton or Ivanka Trump didn't send a classified email themselves, someone from the government could end up sending them one.

But Ivanka Trump isn't the only offender, not even in her own family. She shared this private email domain with her husband and senior adviser to the president, Jared Kushner. And the practice dates back to well before Clinton, who used former Secretary of State Colin Powell's email usage in part to justify her own.