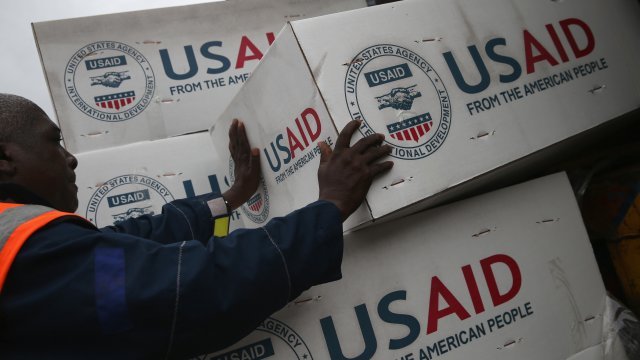 SMS
Why Trump's Budget Cuts To US Soft Power Matter
By Jake Godin
By Jake Godin
July 4, 2017
Trump's proposed budget for 2018 includes a 29 percent cut to funding for the State Department and other aid programs. Here's why that matters.
SHOW TRANSCRIPT

For decades, soft power has helped the U.S. remain a world leader. But could America's diplomatic dominance be coming to an end?

Why is the U.S. a powerful nation? Partly because of its military — that's hard power; its resources and bases outnumber anyone else's in the world. But American soft power is another big factor. That's the ability to attract nations to a common goal without coercion or payments.

The U.S. has more embassies, consulates and missions abroad than any other nation. And it has 60 treaty allies, while other rising superpowers have far fewer. This is because the U.S. spends time, money and effort on global diplomacy — it has since World War II.

That's when U.S. enacted the Marshall Plan. The act, overwhelmingly passed by Congress in 1948, dumped $12 billion into rebuilding Europe after it was ravaged by the war. Spending money on countries destroyed by the Nazis apparently buys a lot of goodwill — and some solid trading partners.

Today, fighting climate change is another way to build alliances through soft power. But the U.S. is pulling out of its leadership role on the issue, leaving China to fill the power vacuum.

And President Donald Trump's plans for the federal budget will cut into programs meant to expand U.S. soft power. Those include the East-West Center, United States Institute of Peace, U.S. African Development Foundation and Woodrow Wilson Center. Congress created each of these, which historically have received federal funding. But each might lose that funding if Trump's budget goes through.

Although cutting these programs might save some money, it could hamper U.S. soft power in places like Africa, where the U.S. is increasingly competing for influence against China.

Disaster relief from the U.S. often improves how other countries view Americans. Surveys from Pew Research Center show Indonesia and Japan had more favorable views when the U.S. gave them millions in aid after major natural disasters.

Lawmakers on both sides of the aisle like foreign aid, so gutting it hasn't been a very popular move.

Foreign aid isn't the only source of soft power. Nongovernmental organizations, Hollywood, universities and Silicon Valley can be other means for soft power. Each helps build cultural or technological ties between the U.S. and folks abroad.

But even those centers of influence could be damaged by America's growing unpopularity around the globe — and by the decay of U.S. soft power.