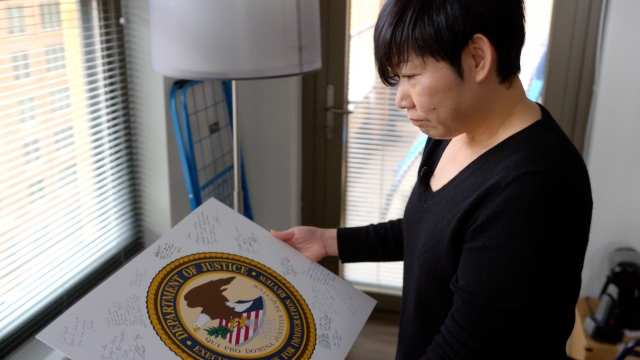 SMS
Why This Burned-Out Immigration Judge Quit Her Job
By Ben Schamisso
By Ben Schamisso
February 25, 2020
More immigration judges are stepping down due to pressures "to speed up and deport more." One former judge shared her exclusive story with Newsy.
SHOW TRANSCRIPT

"These are the boxes that I brought with me when I stepped down from the bench. I have to confess that I've not had the heart to go through them and put them away yet. I loved being an immigration judge, I hope that comes through as well," said Traci Hong.

Last November, Hong quit her job as an immigration judge. She says she left for the sake of her mental well-being. Hong had been on the bench for nearly 7 years and intended on staying much longer. She knew from the start that the job would be demanding and emotionally draining. But she says an already difficult job gradually became intolerable as a result of new Trump administration policies.

"So it's not unusual for an immigration judge to hear stories of domestic violence, gang violence, political persecution from people who are fleeing their government. So you can't tune out ever. I sort of compare it to surgery. If I made the wrong decision, I could very well send them back to harm's way, sometimes to life or death," Hong said.

In an effort to tackle the more than 1 million immigration cases awaiting decisions, the Trump administration introduced a quota of 700 cases a year for immigration judges in 2018. And it started tracking judges' performances with real-time speedometers on their computer screens.

"So rather than deciding, 'oh, you're a good judge, or you're a bad judge,' because you made the right decisions in this case based on the law, it just became, 'who cares what the decisions are, just make the decisions and get it done,'" Hong said.

The Department of Justice, which oversees immigration courts, tells Newsy that the quota reflects "the intent of Congress to adjudicate immigration cases within specified time frames." The DOJ adds that speeding up caseloads ensures "that all who come before its courts will receive due process and a timely and fair adjudication."

"I'm not here to pick a quarrel with them about whether or not they could impose quotas, but I do want to explain what it was like to have the quota hanging over your head. And what impact it may or may not have had on myself and on my colleagues as hard as we tried," Hong said.

The DOJ also took away immigration judges' ability to temporarily close cases with missing or pending information. It said that tactic allowed undocumented immigrants to remain indefinitely in the U.S. But Hong says the tool was a crucial way to stay on top of her caseload. Feeling less and less in control of her courtroom, she eventually decided to call it quits with help from her worried family.

"You want to be supportive of somebody that's in crisis. And I think that's what this job was: putting her in crisis," said Josh Bernstein, Hong's long-time partner. "The easy thing to do is just to make rulings and not really to look into the cases. But if you care, then you have to dot your i's and cross your t's because people's lives are at stake. And Tracy is the type of person that will not be able to live with herself if she doesn't do that."

Like Hong, an increasing number of immigration judges are quitting or retiring early — according to statistics the immigration judges union gave Newsy. The union blames the trend on the Trump administration's pressures on judges "to speed up and deport more."

Said union president Ashley Tabaddor: "In the 23 years that I've served at the Justice Department, I have never seen the level of hostility toward immigration judges who preside over immigration proceedings, the individuals who appear before them, or the due process rights that the constitution and this body, Congress, has provided in our laws."

The DOJ doesn't track individual reasons for judges' retirement or separation. But a spokesperson tells Newsy that the government's increased hiring of immigration judges cancels out the increase in judges leaving the bench. As for Hong, she hasn't decided what to do next professionally. But now that she's recovered from her burn out, she's able to look back positively on her time on the bench.

Said Hong: "At the end of a master calendar hearing, I was wrapping up, it was a very long hearing. And the attorney said, 'Judge, this young lady wants to tell you something.' And I was a little frightened. 'Like what?' And she said, 'thank you for hearing these cases, the way you've heard it. And I want to be an immigration judge when I grow up, I want to be like you.' And that is possibly the greatest compliment I've ever gotten in my career."