Why These US Businesses Want More Foreign Guest Workers 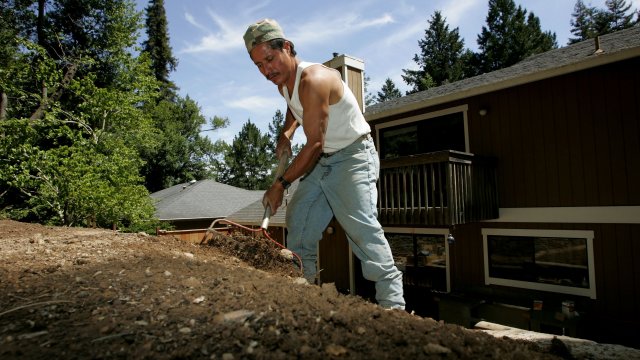 SMS
Why These US Businesses Want More Foreign Guest Workers
By Ben Schamisso
By Ben Schamisso
May 9, 2019
The Trump administration has added 30,000 visas for guest workers this summer. We caught up with businesses that rely on these visas to stay afloat.
SHOW TRANSCRIPT

"I think some people that are against this program don't understand is we have to try to find U.S. workers."

Rene Jimenez and Joseph Barnes work for two landscaping companies that rely on the same controversial immigration program to stay afloat. It's called H-2B, and it allows some U.S. businesses to hire foreign workers for seasonal jobs they say Americans won't do.

"The reality is it's very, very hard work. It's very, very hot. And most people, given the opportunity, even if making less money, you know, would rather work inside. It's just a sad truth of the way it is."

The program is extremely popular among landscapers, seafood processors and tourism businesses. For years, they have relied on temporary workers, most of them from Mexico, who come for the work season and then go back home. You might also remember news stories about some of President Trump’s businesses applying for hundreds of these visas.

But the capped program is also increasingly competitive. Newsy found that with the U.S. unemployment rate at a 49-year low, requests for visas are through the roof. Yet the 66,000 visas-a-year cap hasn't been raised in decades.

"The cap is really the biggest issue with the program right now."

"If I do not receive my H-2B visas this year, I could potentially be out of business by the end of the year."

For the first time in 11 years, Jimenez & Sons Landscaping's request for 25 Mexican guest workers didn't make the cut. To put things into perspective: The law says companies have to make an effort to hire Americans before foreign workers. And the family-owned business tried that, offering around $16 an hour — but only managed to hire seven.

"The requirements are if you apply for the job, you're going to get hired. And as of right now, only five of them are still with us."

Newsy's Ben Schamisso: "What happened to the two who are not with you anymore?"

"They both quit, too. They said it was too hard."

Under pressure from the affected employers, the Trump administration announced this week it would allow an additional 30,000 visas for the summer for returning workers who have had the visas before. This could be a lifeline for the Chicago-area company.

"When you do lawns, you have to start your contract on April. You have an actual start date. So when your visas are held back, you actually have to forfeit a lot of those contracts. We're keeping our fingers crossed, and hopefully we'll be within that cap. And, you know, we'll be able to salvage our season."

But the program also has many opponents. They say employers should try harder to hire Americans and, if necessary, raise wages. In an email to Newsy, a group that lobbies for immigration restriction, said that "the use of guest workers has become the default option for many employers, instead of an option of last resort when they have exhausted all good faith efforts to find American workers."

Other critics say that H-2B workers' wages — even though they're based on average local wages — actually drive down pay for American workers in similar jobs.

Immigrants' rights advocates have also raised concerns that some of these workers are at an increased risk of wage theft or other kinds of exploitation. Barnes and Jimenez say none of that is true for their companies.

"Some of these workers are workers that have been with us for 10 plus years."

Besides, many employers argue that allowing more guest worker visas every year would reduce the incentive to hire undocumented workers instead.

Yellowstone Landscape managed to recruit 279 H-2B workers for the season to supplement its 900 full-time workers. Barnes told Newsy it costs his company an average of $1,500 to pay for a single guest worker's application and travel expenses.

"One of the things that often comes up is, we know you're paying an awful lot of money to bring these H-2B guest workers here. If you gave that money back to an American worker, you know, wouldn't they stay? We tried that, you know, we tried seasonal bonus programs where if you come in in April and you last through October, you know, we'll pay you $500, $1,000, $1,500. And it doesn't really impact how long these folks stay and do the work."