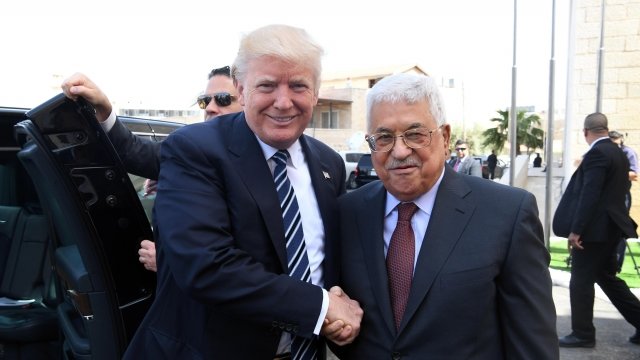 By Sebastián Martínez Valdivia
September 21, 2018
The White House's hard-line stance against Palestinians has dampened hopes when it comes to implementing a new peace plan.
SHOW TRANSCRIPT

The president has called peace between Israelis and Palestinians the "ultimate deal," and pledged to help facilitate it. But his administration has repeatedly taken actions key allies in the region say undermine the prospects of a deal.

In May, the Trump administration moved the U.S. embassy in Israel to Jerusalem, as protests in Gaza left dozens of Palestinians dead at the hands of Israeli security forces. Palestinians also claim Jerusalem as their capital, and the city contains Islamic holy sites.

More recently, the White House moved to cut all U.S. funding to the United Nations agency that provides aid to more than 5 million Palestinian refugees. Weeks later, the administration announced it would close the Palestinian Liberation Organization's DC office.

All of these moves reportedly aimed to put pressure on Palestinian officials to negotiate. But officials from Egypt and Jordan, countries which have historically played big roles in brokering peace talks, say that approach isn't working.

Even allies in Europe are reportedly worried the administration's actions have moved Israel and Palestine farther from a two-state solution, which the U.N. says is the "only answer" for peace in the region.