Why There's A Backlog In Criminal Courts 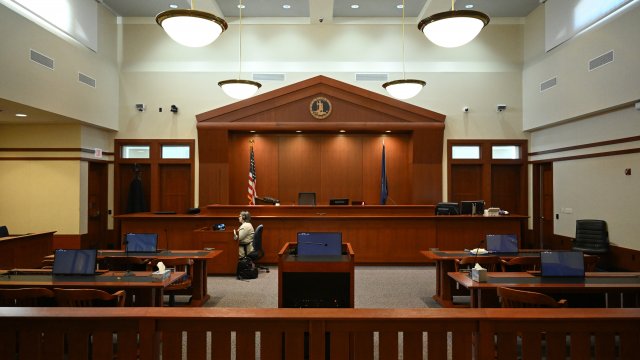 Criminal courts have more cases than they can handle.

It’s a problem that the pandemic exacerbated when courts shut down.

When criminal courts hit pause, cases continued to pile up with no judge or jury able to hear them.

The right to a speedy trial is guaranteed in the U.S. Constitution. But in the last few decades things are only slowing down, and not just because of the pandemic.

In 2011, the National Center for State Courts issued guidelines for how long cases should take, from filing charges to a verdict.

It recommended a maximum of 365 days for almost all felony cases.

That was double its guidelines from 1983, when it recommended a maximum of 180 days. It found courts couldn’t keep up with that timeline.

That meant even before COVID, defendants — many who claimed they were innocent — waited months to face judgment.

And those issues are still lingering, even as the nation recovers from shutdowns.

Defendants continue to wait to face a jury, and victims are left waiting with no answers or closure.

A Missouri State University study found defendants who are innocent may be more likely to plead guilty to crimes they didn’t commit, just to avoid a long wait in jail.

At the federal level, 97 percent of convictions are obtained through plea bargains. It’s 94 percent in state courts. Those deals are often taken to avoid a long and uncertain waiting period.

Another problem? Like other industries., courts are also short on workers. And that could get worse.

A report from the International Bar Association found one in five lawyers under the age of 40 is considering leaving the industry in the next five years.

Some states are trying to help, to ease the backlog.

In Wisconsin, the state public defender’s office is asking private attorneys to take on cases.

But while courts try to ease their backlogs, defendants and their accusers continue to wait.