Why The UN's Special Envoy To Yemen Quit 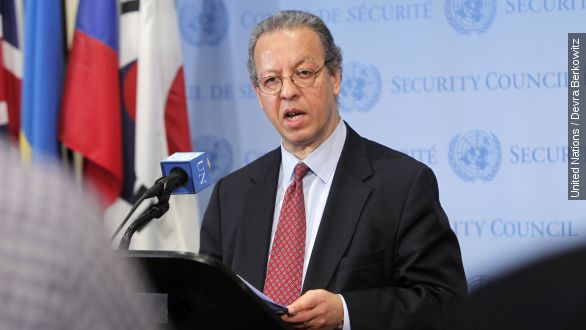 SMS
Why The UN's Special Envoy To Yemen Quit
By Jake Godin
By Jake Godin
April 16, 2015
Jamal Benomar, the United Nations' special envoy to Yemen, has resigned amid criticism over his peacekeeping mission in the Gulf nation.
SHOW TRANSCRIPT

"There is a prevailing sense amongst Yemenis that the situation is on a rapid downward spiral," Jamal Benomar said at a U.N. Security Council meeting on March 22. "Many are also concerned that the conflict has taken on worrying sectarian tones and deepening North-South divisions."

On Wednesday Jamal Benomar, the U.N.'s special envoy on Yemen, resigned. A U.N. statement said Benomar "has expressed interest in moving on to another assignment."

Since his appointment in 2011, the veteran Moroccan diplomat had been set on achieving a political solution to the worsening conflict in the country and avoiding any violent escalations.

In the end, it didn't work. And now Yemen is sinking deeper into a war between Houthi rebels and a Saudi-led coalition intent on righting the country's government by force. (Video via Ahmed Sayaghi, CNN)

"There were prospects for peace, and now this transition is in disarray. The country is in a state of civil war. There is a lot of havoc and chaos," Benomar said.

Since then, Benomar's attempts at reaching a diplomatic solution to end the fighting have come under criticism by both the Saudis and the exiled U.S.-backed president. Abed Rabbo Mansour Hadi, according to The New York Times, told the U.N. he would no longer take part in talks mediated by Benomar. (Video via National Dialogue Conference)

Benomar's resignation underscores the increasingly dire situation in Yemen as the country faces a looming humanitarian crisis. (Video via CCTV)

According to the World Health Organization, at least 650 people have died since the conflict escalated in mid-March and cities are facing shortages of much-needed supplies such as water, food, fuel and medical supplies. (Video via UNICEF / Rajat Madhok)

This video includes images from the United Nations.