Why The U.S. Just Sent 6 Guantanamo Detainees To Uruguay 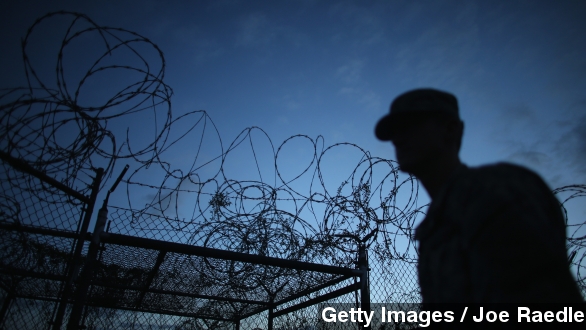 The six prisoners freed from Guantanamo are being resettled to Uruguay, instead of being sent home.

Six prisoners are leaving the detention camp at Guantanamo Bay but they're not heading home just yet. First they have to go to Uruguay.

That's because Uruguayan president Jose Mujica applied for their asylum on humanitarian grounds, and an agreement was settled last spring. (Video via CNN)

As CBS reports, Defense Secretary Chuck Hagel was sluggish in approving the deal and his, "perceived 'slow-walking' of releasing low-level detainees became a sore point between Pentagon and the White House."

The six inmates in question — four Syrians, a Palestinian and an Iranian — had been imprisoned at Guantanamo for 12 years without being charged, and were recommended for release five years ago.

Although the detainees were ostensibly supposed to resettle in Uruguay for at least two years, President Mujica told the press Saturday they'd be free to go home whenever they please. (Video via TNU)

Mujica was sharply critical of the U.S. in his comments, saying if any other country did what the U.S. had done at Guantanamo, the U.N. would come down on it. (Video via VICE)

The New York Times writes the U.S. was ready to transfer the six men back in August, but "Mr. Mujica was worried that it would be politically risky to follow through because of coming elections in his country, according to Obama administration officials."

Resettling detainees to other countries has been part of President Obama's effort to close the prison, one of his early campaign promises that he's struggled to keep, despite signing an executive order in 2009 to close it within the year. (Video via The New York Times)

As it stands, with the six detainees gone, 136 people remain detained at Guantanamo Bay.