Why The U.S. Has A Debt Ceiling, While Most Other Countries Don't 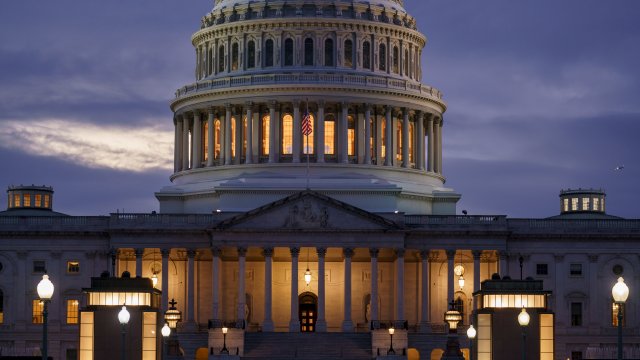 SMS
Why The U.S. Has A Debt Ceiling, While Most Other Countries Don't
By Newsy Staff
By Newsy Staff
December 21, 2021
The U.S. debt ceiling was raised by $2.5T, but it's been raised dozens of times since its 1917 creation.

"The resolution we will vote on, will provide for raising of the debt limit to a level commensurate with funding necessary to get into 2023," said Sen. Chuck Schumer.

Now that’s a lot of money, but if they didn't raise it, the country wouldn't be able to pay our bills. Things like social security benefits would be delayed, the military wouldn't be paid, and food assistance would stop.

"It would be disastrous for the American economy, for global financial markets and for millions of families and workers whose financial security would be jeopardized," said Janet Yellen, Secretary of the Treasury.

This move prevented the U.S. from defaulting on our debt for the first time ever, but not everyone was crazy about the idea of raising it.

"This idea puts all of us in a box and I don’t appreciate it and I won’t forget it," said Sen. Lindsey Graham.

The country has this debt because we spend more money than we take in. Our current national debt is about $30 trillion. The majority of it was approved in previous years.

Raising the debt limit doesn't allow for new spending but allows the Treasury to pay for spending that's already been approved. But how exactly does the debt ceiling work and why do we have it in the first place?

The U.S. and Denmark are the only western countries with a debt ceiling, but the way it works looks different in both countries.

The U.S. debt ceiling was created in 1917 when Congress passed the Second Liberty Bond Act. Before that, each loan or bond were approved as they were taken out. With the ceiling, there was a limit set for how much could be borrowed that required congressional approval to increase the total amount. Since then, the debt ceiling has been raised dozens of times.

Once the limit is hit, the Treasury can take "extraordinary measures" to extend how long it can continue paying its bills. And the government had to do that for a few months this year as they debated if and how to raise it.

Across the way, Denmark established theirs a bit later in the 1990s. But their debt ceiling is so high that they rarely get close to it, so it's not a recurring debate like it is in the U.S. The closest they ever came to reaching their ceiling was 2010, but then after that, they doubled it.

The U.S. should be good for now, until after the midterm elections.