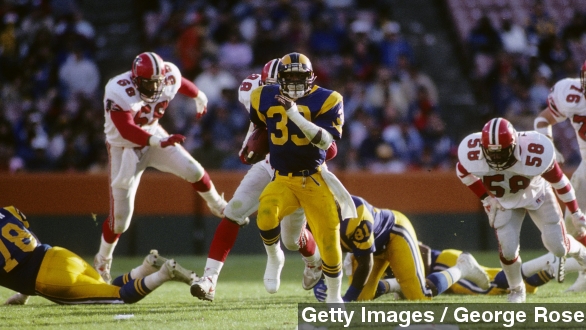 It's one of the worst-kept secrets in the NFL — there will be a team in Los Angeles sooner than later.

But will that team be the St. Louis Rams? It's making more and more sense.

Now, more than times before, it appears the hot stove is heating up for a decision to be made.

The Rams, along with a small handful of other teams, are reportedly in the mix to move cities. The Rams' lease on their stadium runs up this year, and talks of an extension involving renovations haven't gone anywhere.

Fan attendance hasn't improved much, either, with the Rams ranking 29th or worse since 2008.

The Rams are reportedly front-runners, with the San Diego Chargers and Oakland Raiders also in the mix.

But it seems like the Rams are most interested amongst that group and the most likely to move out. Here's why.

Of course, the St. Louis Rams already have a fan base in L.A. They moved from Los Angeles to St. Louis in 1994. Now they could be moving back.

It started with current team owner Stan Kroenke purchasing the Rams in 2010. While there were rumblings of the Rams movement back then, Kroenke said, "We're here to work hard and be very successful in St. Louis."

Then, those rumblings got much louder earlier this year when Kroenke purchased land in Inglewood, California, an area about 20-30 minutes away from downtown L.A. (Video via Google Earth)

"This is where that stadium would go up right next to The Forum, which just reopened. It would be built on these 60 acres of land which are now covered with a vacant parking lot and butt right up to the old Hollywood Park racetrack," KCAL reporter Kara Finnstrom says.

That was followed up shortly after with Inglewood's mayor saying he was meeting with Kroenke.

St. Louis officials, for their part, are at least trying to keep the Rams in town.

In November, Gov. Jay Nixon appointed a two-man team board to help keep the Rams in town.

"I just think that the NFL understands that we are very serious. We are prepared to look at serious options to make sure we stay an NFL city," Nixon told reporters on KMOV.

But too little too late?

NFL Executive Vice President Eric Grubman, who's in charge of the NFL's initiatives in L.A. spoke at the NFL owners meetings last week.

CBS Sports reported Sunday that during those meetings, "Kroenke, whose strong desire to get to LA as soon as possible is well known in league circles, was watching particularly intently as Grubman spoke."

The Rams officially are free to leave their lease at the Edward Jones Dome Jan. 28. NFL teams have until February to file for relocation.

This video includes images from Getty Images and Mulling it Over / CC BY NC SA 2.0.