Why The NCAA's Concussion Settlement Seems So Cheap 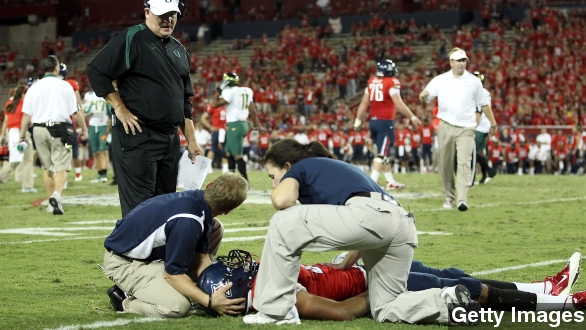 SMS
Why The NCAA's Concussion Settlement Seems So Cheap

"As part of the settlement the NCAA will create a $70 million fund to test current and former college athletes for brain injuries." (Via WCAU)

"The settlement applies to a number of sports including football, hockey, soccer, basketball, wrestling, field hockey and lacrosse." (Via WRC-TV)

As USA Today reports, the settlement comes almost three years after the first of several concussion lawsuits were filed against the NCAA and covers both current and former athletes.

It writes, "The settlement ... establishes a 50-year medical monitoring program for ... NCAA athletes in any sport – a class which includes several million people."

According to The New York Times, the agreement will also set up protocol for players suffering a concussion in games and practices — preventing them from returning on the same day — and will require trained medical personnel to be present at all contact sports.

In many respects, the deal resembles one proposed by the NFL in response to its brain-injury problem — although the numbers attached might look a little different.

As the Los Angeles Times reports, the NFL agreed to remove the cap on a $675 million settlement offer after a U.S. district judge said that figure might not be enough to cover the damages of players with brain injuries.

So why is the NCAA number so low in comparison?

As ESPN explains: "Unlike a proposed settlement in a similar lawsuit against the NFL, this deal stops short of setting aside money to pay players who suffered brain trauma. Instead, athletes can sue individually for damages," meaning the NCAA could still be on the hook for millions.

Unpacking that even further, Businessweek adds: "[The] NCAA wouldn't be protected against future head-injury suits brought by individual athletes. … The NFL bought litigation peace. The NCAA, ponying up far less, did not."

An additional $5 million in the settlement will reportedly go to brain-injury research. The settlement was filed in northern Illinois and still requires a federal judge's approval.