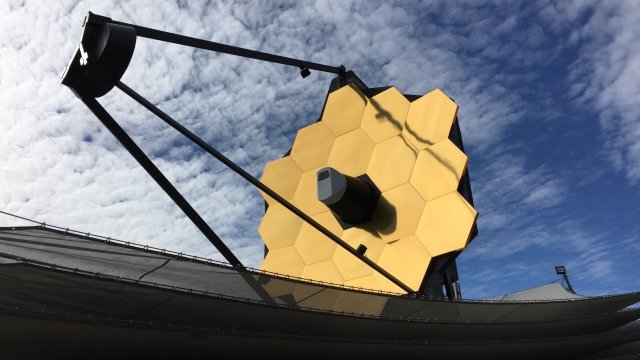 Construction on the James Webb Space Telescope, the successor to the Hubble, was finished in 2016, but the telescope isn't scheduled to launch until 2019. What's the holdup? Testing, testing and more testing.

It's been in development since the mid-'90s, and by the time it launches, it might cost around $10 billion, so a mishap would be really expensive. If that's not stressful enough, getting the telescope to its final destination is extremely complicated.

Once in space, it will have to unfold and assemble itself in a process that takes two weeks. When it gets to its destination, it'll be a million miles from Earth, or about four times the distance to the moon, so sending astronauts to fix anything that breaks will be difficult — if not impossible.

So everything has to go right the first time. That's why NASA spent most of 2017 testing it, and 2018 will be no different.

First, the telescope was bombarded with acoustics and vibrations to see if it could withstand getting jostled around in a launch. Then, it was carefully packed up and flown to Houston where it spent three months in a cryogenically cooled vacuum chamber, testing whether it could function in space at temperatures near absolute zero.

At the same time, its sunshield, a delicate stack of aluminum sheets, was tested in California. The next phase involves sending the main instruments to California as well, where the whole spacecraft can be fully assembled for the first time and, yes, tested some more.

NASA even tested its tests: A replica of the James Webb telescope was also shipped around the country and cryogenically frozen, just to make sure the tests themselves were safe.

And NASA and the European Space Agency aren't taking any chances with the launch. When the telescope finally lifts off, it'll be riding an Ariane 5, one of the most dependable rockets in use today.