Why The Amazon's Biggest Fish Is Quickly Going Extinct 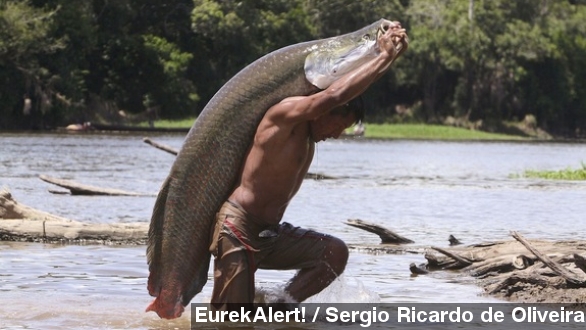 SMS
Why The Amazon's Biggest Fish Is Quickly Going Extinct

By Briana Koeneman
August 14, 2014
According to a new study in Brazil, the massive arapaima fish is quickly becoming extinct in some parts of the Amazon basin.
SHOW TRANSCRIPT

A massive species of fish that used to dominate the Amazon river is quickly dying out in several areas.

A recent study of fishing communities in the state of Amazonas, Brazil found the giant arapaima (air-ah-pie-ma) is already extinct in some parts of the Amazon basin. (Video via Animal Planet)

The BBC notes, of the 41 communities researchers studied, arapaima populations were extinct in eight of them.

And the giant fish, which typically weighs in at more than 400 pounds, is rapidly disappearing in other parts of the Amazon. (Via via Tennessee Aquarium)

So what's the reason behind the arapaima's rapid extinction? Scientists have a simple answer: overfishing.

LiveScience quotes a researcher involved in the study, who says the arapaima is just too easy to catch.

"Arapaima spawn on the edges of floodplain forests and come to the surface to breathe every 5 to 15 minutes, when they are easily located and harpooned by fishers using homemade canoes."

And with populations growing and the fishing industry finally reaching Amazon villages, the research says these massive fish don't stand a chance.

See, there were two competing theories the researchers explored: The first is essentially the idea that overfishing can't cause extinction because fishermen have to move on when supply starts dwindling. The second theory is basically the opposite: That fishing can drive a population to extinction.

One of the study's authors said in a statement, "Bioeconomic thinking has predicted that scarcity would drive up fishing costs, which would increase price and help save depleted species. If that prediction were true, extinctions induced by fishing would not exist, but that is not what has happened."

The arapaima isn't the only aquatic creature in the Amazon to recently fall victim to local fishermen.

Brazil's Fishing and Aquaculture Ministry announced in June it is in the process of outlawing the fishing of a certain breed of catfish to protect the Pink Amazon River Dolphin, whose flesh is often used as bait for the catfish. (Video via National Geographic, BBC)

But there was also some good news that came out of the arapaima study. In communities where arapaima fishing is regulated, the species is actually doing pretty well, giving scientists hope that the species could be spared.