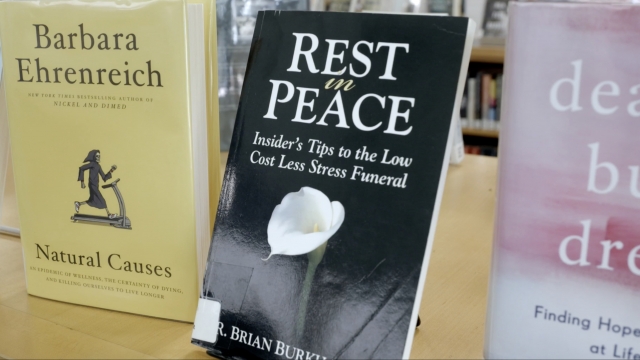 SMS
Why You Should Have The Uncomfortable Talk About Funeral Plans
By Amber Strong
By Amber Strong
July 15, 2021
One of life's biggest expenses is death: On average, a funeral costs about $10,000.
SHOW TRANSCRIPT

That’s how much GoFundMe says has gone toward memorial fundraisers every year, covering things like family support after a death and funeral costs, an average $10,000 expense. Those high costs for death care can come as a surprise for the unprepared.

Death – and what you want after you die – is the conversation nobody wants to have. Unless, of course, you're librarian Andrea Castillo and have led discussions at the local Death Cafe.

"I had started as a person kind of trying to confront my own anxieties about death," Castillo explained.

Known for protecting anonymity, death cafes around the world tend to be held at places like this library, where people are comfortable gathering over coffee, cake and conversations on death.

"The topics can run the gamut from, you know, we've talked about what it's like, you know, losing a parent or losing a sibling. What arrangements do you want to make? Living wills? There are even like, what it's like to clean out your relative's house after they die,” said Castillo.

Sandy Schlaudecker and Isabel Berney are volunteers with the Blue Ridge Virginia branch of the national Funeral Consumers Alliance. They say the kinds of talks happening at death cafes are a good first step in planning for one of life’s biggest expenses.

“For the basic funeral, at one place that might be $5,000. Cross the street, it might be $10,000,” said Sandy Schlaudecker, board president with the Funeral Consumers Alliance of Virginia Blue Ridge.

With prices varying so drastically, it may seem hard to know what’s fair and what isn't if you are suddenly faced with burying a loved one or just hoping to plan ahead. The FCA says that's where it comes in, compiling a list every two years comparing local funeral home costs.

"Once the person has died, [their loved ones are] traumatized. Everything is happening so fast, comparison shopping just is not like a mindset,” said Schlaudecker.

The Federal Trade Commission also lays out some of the guidelines to protect consumers during what can be a really tough time. It’s known as the Funeral Rule. For instance, funeral homes must provide an itemized list of the total cost of a funeral or at least a “good faith” estimate up front. They also can’t force you to buy one of their caskets and must accept caskets from third-party vendors, which may be cheaper than what you’re offered onsite.

Schlaudecker and Berney say their group’s mission is to make sure people know this kind of info exists and to encourage families to prepare but never prepay.

“It's a good idea to think about what you want and to know about how much it will cost us. Then you set aside that money and you control that money. Don't give it to a funeral home, because no one prepays for a TV and picks it up three years later,” said Berney.

But sometimes, with all the preparation in the world, finding the cash is still difficult -- which leads some to turn to crowdsourcing. Still, experts say having the conversations now about the unthinkable can ease the burden, even if only emotionally.