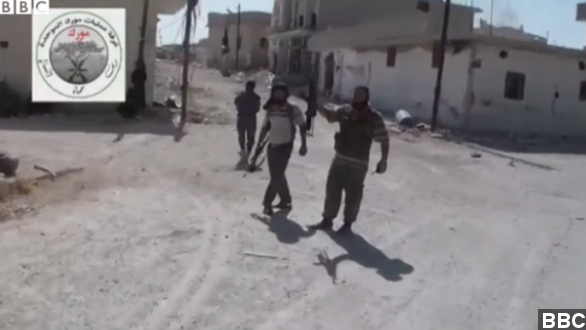 By Elizabeth Hagedorn
July 27, 2014
As many as 1,700 Syrians died last week, yet the violence was overlooked with the media's attention focused on the conflicts in Ukraine and Gaza.
SHOW TRANSCRIPT

With the world’s attention fixed on the crises in Gaza and Ukraine, Syria has faded from the headlines. Pretty incredible when you consider Syria just experienced what might be its bloodiest week of fighting since civil war began three years ago. (Via NBC, ABC, ITN, CBS)

The Syrian Observatory for Human Rights — a London-based, anti-regime group that monitors the conflict’s death toll — says in a 48-hour span, 700 Syrians died last week — making for a total of 1,700 casualties for the entire week.

That’s the same group that’s put Iraq on the brink of full-blown sectarian war this summer and now goes by the name the Islamic State. (Via YouTube / RMC)

This video, which the BBC describes as "too graphic to be shown uncensored," shows the group's brutal attack on a government-run oil field last week — resulting in a major loss of life for both sides.

If you didn’t hear about this, you’re not alone. Slate's Joshua Keating offers a theory as to why most news outlets barely made mention of the fighting, if they covered it at all.

“Syria is a long-running conflict. Americans are reminded of it whenever something dramatically changes: use of chemical weapons raising the possibility of U.S. airstrikes, or the conflict expanding into Iraq. Nothing has happened recently to quite rival the flare-ups happening elsewhere."

And there might be another reason Israel especially has drawn more media coverage, says The Atlantic's Jeffrey Goldberg. "Israel is a Western-style democratic state and so reporters are more apt to be interested in its behavior, and judgmental about its behavior, than in the behavior of despotic regimes."

It's also worth noting, while both conflict zones are dangerous, it's much harder to report in Syria than it is in Gaza. Visas are hard to come by and journalists are frequently targets for kidnapping.