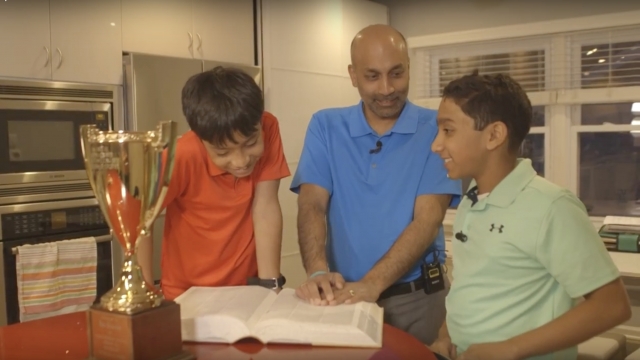 South Asians make up only 1% of the U.S. population but about 20% of bee spellers. They're doing so well, they've outsmarted the competition itself.

"The way Indian Americans have approached the spelling bee, at least over the last decade or so, has changed the tenor of the bee for all kids who compete."

South Asian American kids are dominating the Scripps National Spelling Bee. In fact, they're on an 11-year winning streak right now. South Asians make up only 1 percent of the U.S. population but about 20 percent of Bee spellers. And they're doing so well, they've actually forced the bee to change its rules, making the competition harder for everyone.

I’m actually part of that trend, as an Indian American who competed in the bee 21 years ago. Back then, I told my hometown newspaper I was good at spelling because I loved reading. I didn't realize I was part of a bigger story.

There isn't a single reason why South Asian Americans have been dominating the Scripps National Spelling Bee for the last 20 years. But it goes back to at least 1965. That's when the U.S. passed a key immigration law. It abolished discriminatory quotas based on national origin. So South Asians started migrating to America in huge waves — most of them highly educated and highly skilled. And another immigration law in 1990 brought even more South Asian professionals thanks to the tech industry.

Then in 1985, Balu Natarajan became the first Indian American to win the Scripps National championship — making headlines both here and in the Indian subcontinent.

Over the next several years, visibility ramped up: ESPN started broadcasting the bee finals, and an Oscar-nominated documentary showcased another Indian American kid's win. Millions of South Asian kids were inspired to compete.

Like a sport, spelling even has its own minor leagues — South Asian community bees that help "train" spellers for the Scripps Nationals. It's no coincidence that this South Asian American winning streak started in 2008 — the same year one of these community bees started.

Dr. Shalini Shankar spent years researching this generation of spellers and their families for her book "Beeline."

"One of the things that's really amazing is that those parents and the former students who competed in the bee will spend their time administering contests for you know, younger kids, they'll help with the word lists. They'll serve as judges and pronouncers."

Basically, parents are coaches. They emphasize the academic excellence that helped them immigrate here in the first place. They encourage self-reliance and help out strategically.

Filmmakers Sam Rega and Chris Weller highlighted this in their documentary "Breaking the Bee."

"For Shourav, who you see in the film, is just typing words per second going so fast through his spreadsheet. His parents helped put that together because in their occupation, they work with spreadsheets, and like they had a sense of doing that. So they were able to impart that."

All these factors — historic immigration, greater visibility, and a community focused on education — led South Asian Americans to rule the bee. Now, they're outsmarting the bee itself.

"In 2013, Scripps instituted a vocabulary test primarily because it was just taking too long for spellers to just spell on stage and get eliminated. They were just by that point, far too skilled."

"This is intense. I mean, the caliber, the knowledge base of each of the spellers has gone up so much, right?"

Thirty-four years after Balu Natarajan became the first Indian American to win the Scripps National Spelling Bee, his 13-year-old son Atman Balakrishnan is competing in what feels like a very different arena.

"Every day, I wake up at four o'clock, so that gives me from four to seven o'clock to study. Now I try to do my homework as fast as possible when I get back from school, and I get to study another two hours before I go to bed."

"Going from the manual dictionary and typewritten lists that you'd have to find somewhere, now there are thousands of words available with many of these online modules. So you can study, there's a lot more to study, you can study a lot faster. But that just elevates the game."

Ghazala Irshad is a news editor who loves chopping and choosing just the right words to shape strong stories. Before joining Newsy in Chicago, she spent several years abroad reporting on revolutions and refugees in the Middle East and Southeast Asia. Her favorite experience was investigating police involvement in the looting of antiquities from the pyramids in Egypt. She hopes to continue unearthing interesting stories and holding those in power accountable, specifically on environmental and public health issues. She holds a master's in journalism from the American University in Cairo and a bachelor's in journalism from the University of Missouri-Columbia. Fun fact: Ghazala was a member of the Scripps family long before Newsy — as a National Spelling Bee contestant in 1998. @ghazalairshad